This year XTERRA Canada was held in Canmore, Alberta.  Canmore is a little ski town famous for hosting the 1988 Olympic Nordic venues and for the plethora of large wild animals that roam near town.  Bears and elks and deers, oh my!  This year they hosted the XTERRA event along with the Highland Games which made for some busy streets filled with cute skirts worn by men.

The swim was held in Quarry Lake (pond) and the bike/run courses were up in the Nordic trails near the Nordic center. The venue was so pretty. Having raced the Canada Cup mountain bike series years ago I was no stranger to most of the trails so it wasn’t all new but it has been a few years since I have visited Canmore.  Like always, it was pretty much freezing.  Doesn’t matter what month you race in Canmore, it can be winter.  One time it was snowing in winter in July.  No big deal to show up in September and have it snow on the mountains the night before the race.

The field for the women was spectacular with almost everyone showing up.  However, we all knew that Danelle was the one to beat given she lived in Canmore and has done a few races on that same course already this year.  Forget about a technical advantage on these trails, she knows them better than anyone.  Also, her win in Beaver Creek was no fluke and with flat tires I lost the opportunity to try to race with her at the front there so I had to guess where she is at.  I guessed it was at pretty freakin fast.  But she wasn’t the only one of the allstar cast that showed up, we had Renata (Vegas 2012 winner), Suzi, Chris Jeffrey, Katie Button, Chantal Widney (ITU girl 3rd at Apple Tri) and super mountain biker Brandi Heisterman. That is a good international field for an otherwise smallish race.   It meant there were definitely not going to be any easy money spots… it was a battle for all of them. 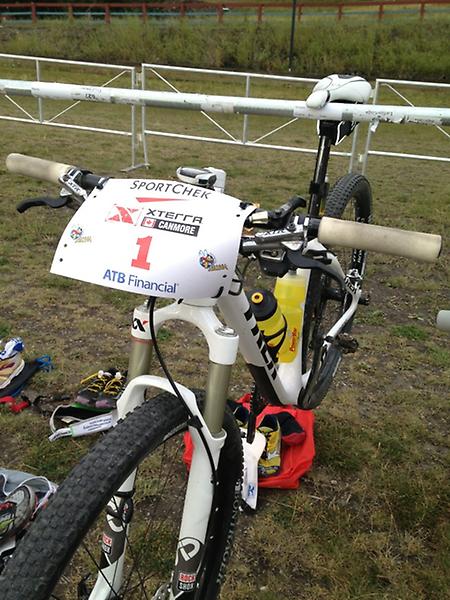 Kate Button and I rock starred into the event at 1am on Saturday morning with our departure out of Calgary scheduled for 4pm on Sunday.  This was a minimal preparation event solely because Mel is having a torrid affair with her Trek Speed Concept.  The impending battle frightened me somewhat because my schedule was a bit insane.  With Trekworld smashed in my training block, I was crunched for time and there was no option but to train right up to this race in order to have a decent go at the 70.3 Worlds next week.  I was feeling good with that training but it was pretty heavy.  Also, that training was definitely different than what the Canmore event demanded, I was running a lot of pace on a flat road in a straight line, and same with the bike.  I did get in a long mountain bike ride with Buttons which was fun but I haven’t tried to ride a mountain bike fast since Beaver Creek in July.  The first fast ride was the race on Sunday and I think some of the cuts and bruises on me show where my skills are at. The run was the toughest though, with no flat sections and constant vertical up and downhill sections the complete lack of rhythm challenged me a lot.  I think this was our toughest XTERRA Canada yet.

The 4 degrees Celsius morning was a good kickoff to the challenge ahead of us.  We had a mass start in Quarry Lake with a 3 lap swim on tap.  The swim was super fun and I love my Highway 19 Rogue wetsuit which fits perfect.  The water was nice and clean, it was warmer than the air and pancake flat for race morning.  It actually got choppy just as a pool would if you filled it to its entirety with people, which is essentially what we did that morning.  I swam comfortably on Mike Vine and Suzi Snyder’s feet, and took it easy on the ins/outs of the water to manage my heartrates in the altitude and exited third behind Christine and Suzi.

Onto the bike I was frozen and moving slowly for the first long while.  I was slow after transition and barely caught Suzy up near the Nordic Center despite coming out of the water together.  We rode together until we got to Laundry Chutes descent where I snuck away from her and Chris Jeffrey.  I then proceeded to have a very enjoyable ride on the trails knowing that my heart rate was about 20 beats lower than I normally race at but also knowing there was nothing I could do about it on the day. 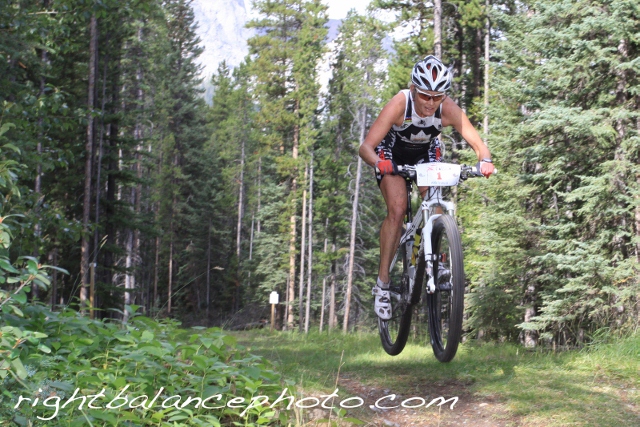 “Can you take that thing off any sweet jumps?” – Trek Superfly superflying off the lip of one of the ski trails.  Photo by Jordan Bryden

When I got to the run my legs felt great although my toes were still frozen in the AVIA Mantis even with socks.  I cruised out on lap one until I saw Danelle on the turnaround.  I then panicked that maybe I didn’t have enough time so I downed a Powergel and turned on the gas as hard as I could.  Then my heartrate started heading to normal territory!  I definitely ran hard on the second lap and caught back up to the first age grouper Simon Heeringa who had blazed past me on the first lap (funny side note: when he ran past he asked me if it was one or two laps. Haha!  He stopped pulling away from me so quickly when I told him it was two).  At the turnaround I saw Danelle had only made a minimal gain on that lap so I knew I was safe.  Running into the stadium I saw little Maya Munzar just up ahead and I tried to run to catch her but she was too fast for me so I opted to cash in some of my advantage to wait for her to finish the 200m out and back section so I could high five her going into her second lap.  Maya is in the 15-19 age category and came second overall age grouper.  She is 100% the future of this sport and is so talented.  It was really cool to race with her and see just how fast she is especially given we got out of the water together.  Way to go Maya! 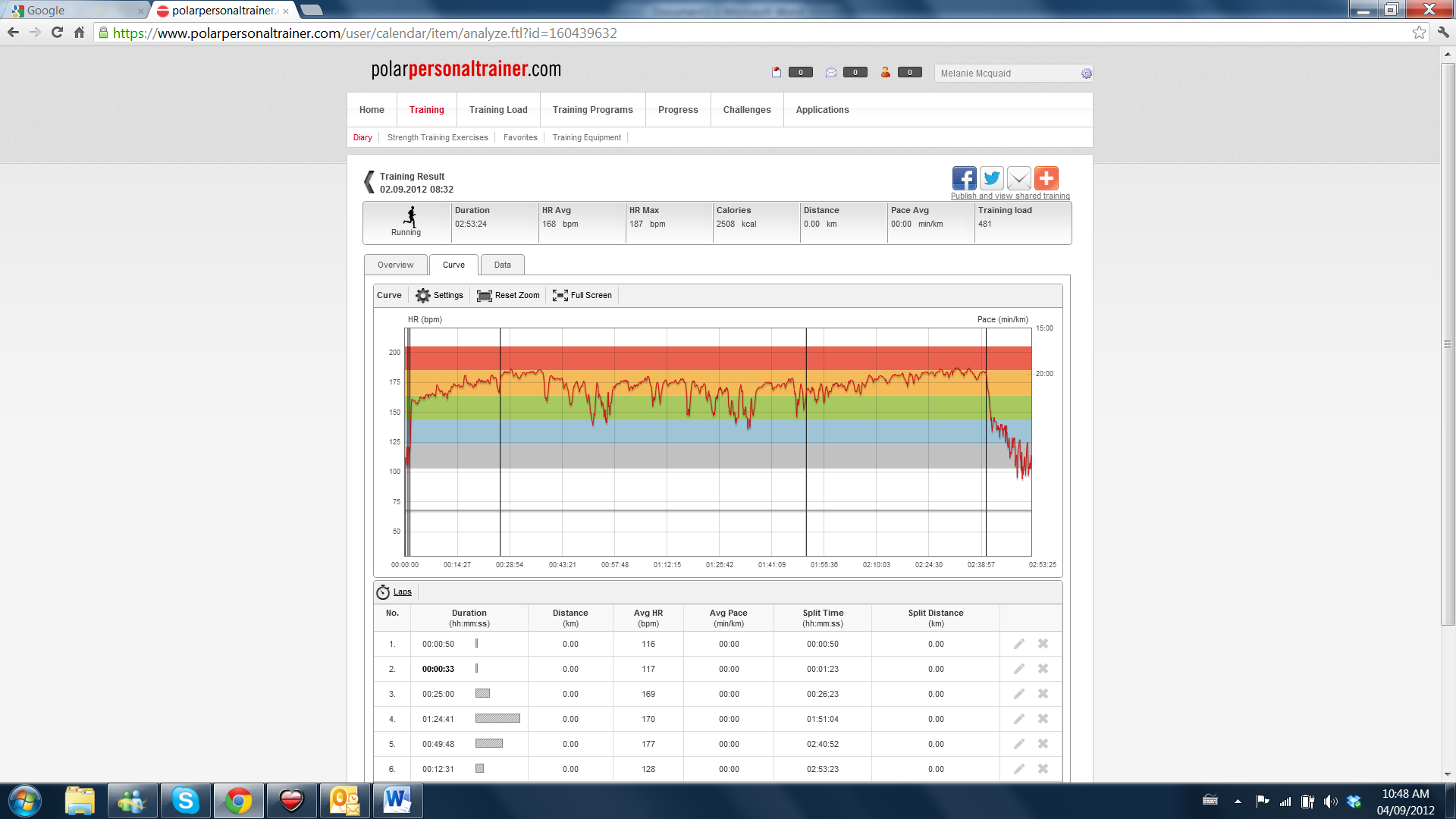 Polar File from www.polarpersonaltrainer.com that recaps the effort on the day.

So Danelle came in just over a minute back followed by Renata, Chantal and Brandi.  Very impressive women’s podium I would say.  I did not have the fastest anything on the day, in fact I was 3rd fastest at everything but all in all it was a solid day.  Most encouraging was my run which is better than it looks on paper and is more in line with where I thought I would be at this point in the season than any of my crap runs I have posted this year. I’m looking forward to putting that to the test both in Vegas next week and Utah two weeks after.  Thanks to Cal Zaryski and Tony Smith for putting together such a challenging event that was run like a well oiled machine.  Also thanks to Pat Kelly for connecting me with his sister Cindy and her son Patrick for a great homestay.

Maybe I had some tough races during the season but I am definitely fresh and motivated to do as much damage as possible for the big races for the end of it.  See ya in Vegas, baby! 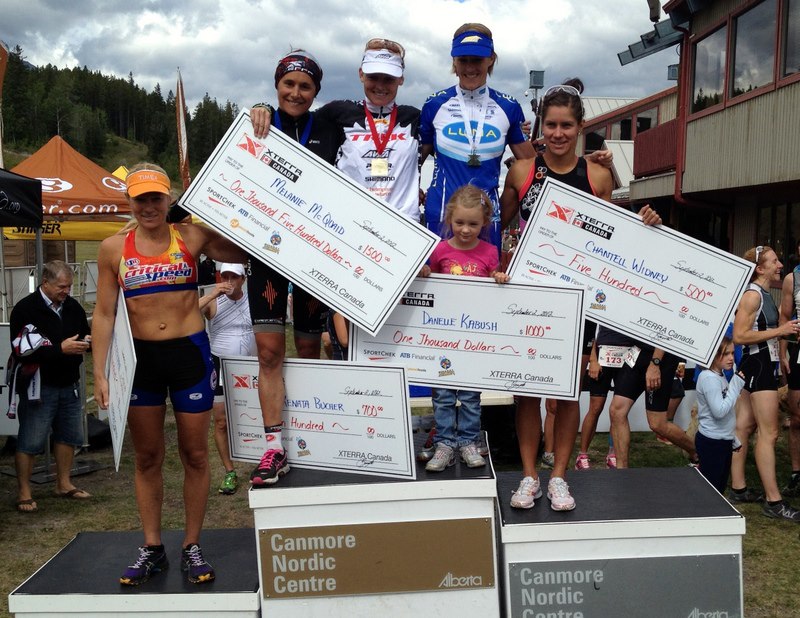