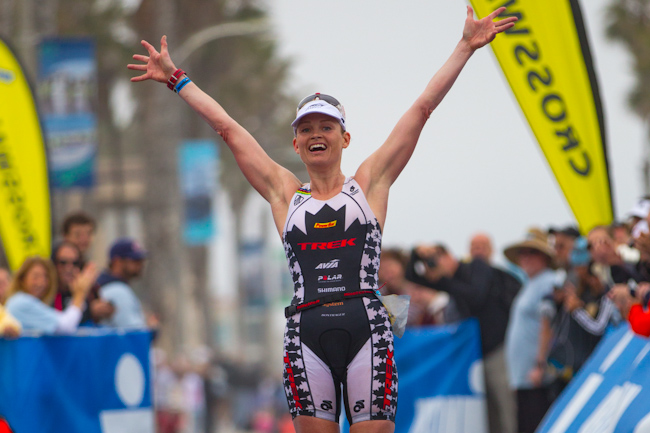 I couldn’t be more thrilled to start off the 2012 season with my  partners with the biggest 70.3 win of my career.  How great is that to give your supporters a boost in confidence right off the bat, huh?  I have had some confidence that I have been keeping somewhat quiet as I slowly built my form towards this season.  To be honest, I wasn’t thinking that I could win given how strong the field was in Oceanside and I was just starting my season.  To nab the top spot on the podium was the most killer feeling that came entirely unexpectedly.  But I think you need some background to understand why this win is so special to me.

First, I would like to thank the incredible female professionals who pushed me so hard on Saturday that I managed to crush my own time from last year’s race by 12 minutes.  Heather Jackson created a great battle before taking second- thank you and wow you are so talented and undoubtedly have many successful years ahead of you.  To Meredith Kessler in 3rd, you are a class act- it was so inspiring to even catch you out there after such a fast swim!  Rachel McBride from Canada, who also rode a Trek Speed Concept to the second fastest bike time in Oceanside, had a breakthrough race to eventually hold 4th place overall. Congratulations to my teammates Linsey Corbin and XTERRA World Champion Lesley Paterson who rode their Trek Speed Concept to 5th  and 6th place on the day.  4/6 top spots on Trek Speed Concepts.  If you aren’t riding a Trek, why not? READ MORE FOR THE REST…..

I have struggled a bit since I came into my first half Ironman distance race a few years ago as I felt my race results didn’t reflect my fitness, particularly on the bike.  This disconnect with my cycling ability, to a certain extent, would carry over into the run.  But really, I am not a runner anyways, I need to ride fast to win.  I like to take personal responsibility for that and tried a number of different bike fits, setups and training strategies on my time trial bike to try to address the weakness but it wasn’t really coming together.  It was kind of frustrating and I struggled with whether I just wasn’t good on the road.  Not much was really working out until I had a chat with Trek.

When Trek sent me a Speed Concept my reality changed.  Not only did I instantly and naturally find the position that was right for me, the metrics in that new position were a revelation.  I didn’t radically change my training over the winter and my numbers, although good right now, are not the best in my career in absolute terms.  They are incredible when compared to what I used to do on a time trial bike the past few years and just shows how fast that bike is especially when I feel comfortable on it.  Improving on last year’s split at Oceanside 70.3 by eight minutes, in what I thought were tougher conditions, is 100% clarification that Trek is where it is at.  This decision and opportunity is absolutely a game changer and I couldn’t be more stoked about it.  That was my 5th ride outdoors on the bike and 3 of them were on the bike path riding easy in a straight line.  There is a lot of room for improvement, especially technically, and that has me pretty fired up. 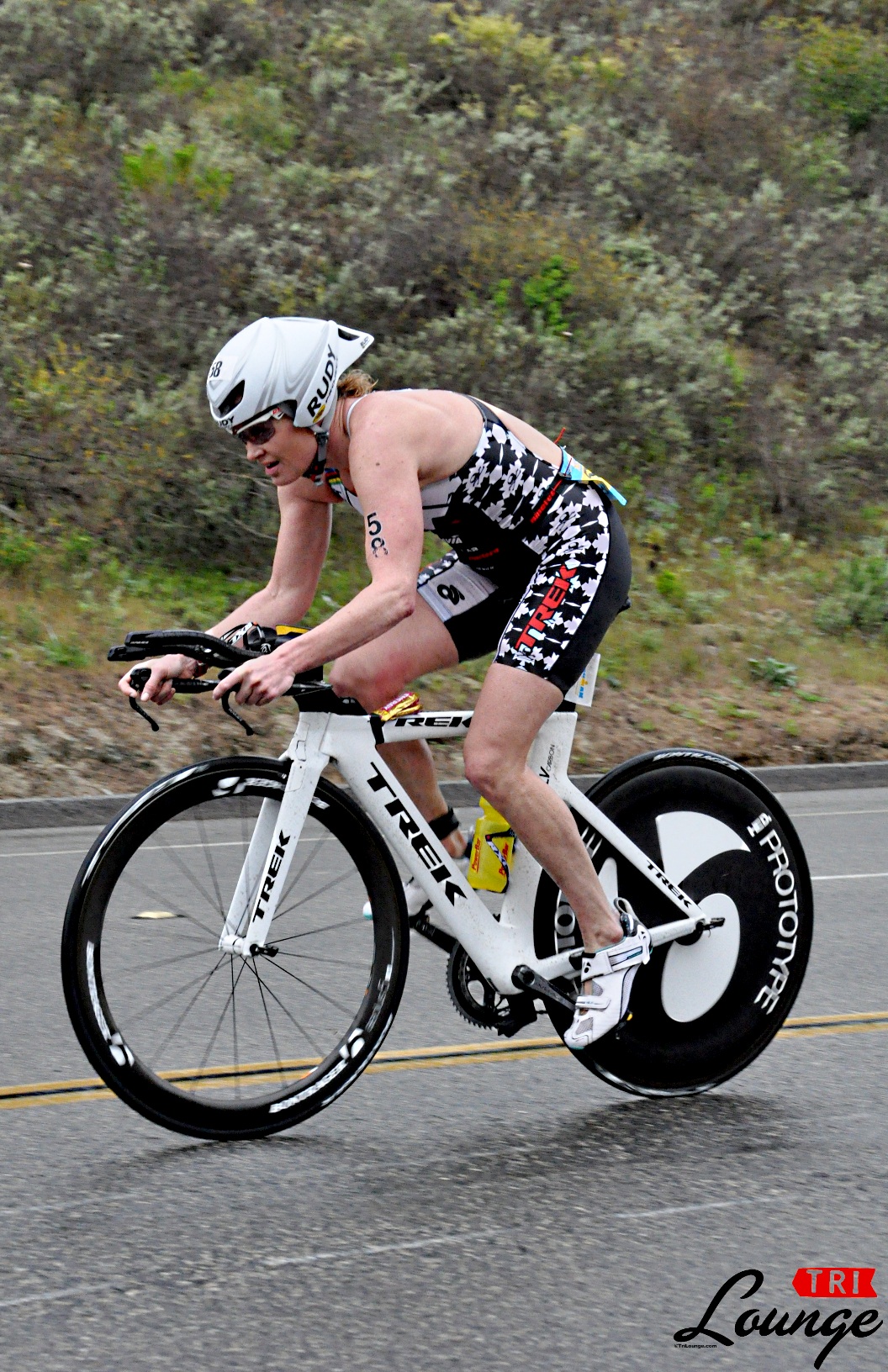 Thanks to Kevin @TriLounge for this photo

It was also a career highlight to work with Mark Andrews from Trek for the first time.  The super-pro treatment was unlike anything I have experienced ever and I could DEFINITELY get used to that.  I was so spoiled with the delivery, setup and takedown of the most incredible bike ever.  I rode a brand new Speed Concept with custom HED disc wheel built with a Powertap hub with an Aeolus front wheel on superfast Bontrager rubber.  I also threw some cleats in my Bontrager Hilos 3 days out from the race and despite brand new shoes my feet were happy.  Trek + Bontrager are so, so good.

Riding that Speed Concept was so much fun despite the dreadful weather.  For the record, I was freezing cold and numb all day just like everyone else.  I didn’t even know whether I was riding fast or not because my legs felt horrible… who rides their bike in the rain at 47 degrees F in a bathing suit, honestly?  That is just stupidity.  My feet didn’t warm up until mile 7 of the run so even though I am nowhere near as tiny as some of those girls that started that doesn’t mean I wasn’t feeling really cold.  I just figured everyone was and I really wanted to keep the lead J 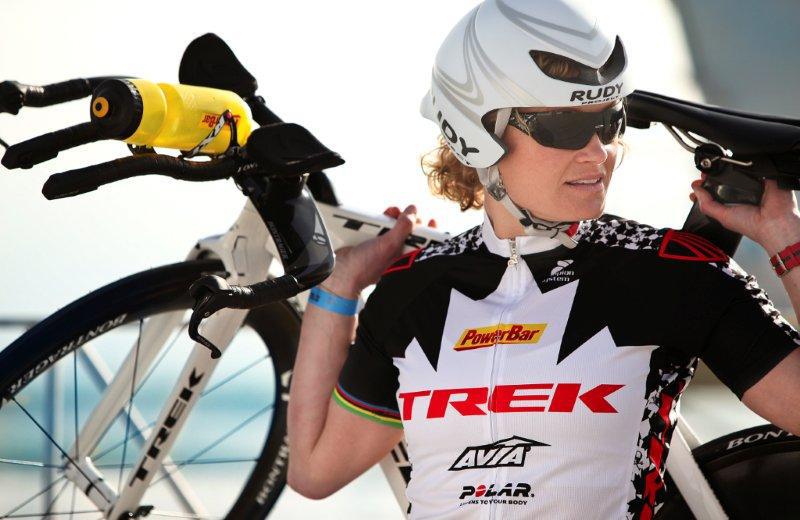 There were some other decisions to make over the winter.  I went through my program to decide what would TRULY make me faster and made decisions accordingly.  Any new partners were brought in to improve the program and the things that were working really well were preserved.  The following is a summary of the overall program I am running in 2012.

This year I have chosen to ride a Rudy Project helmet and their glasses.  This aero helmet does not give you the gnarly astronaut feeling where you can’t hear what is going on around you which helps when you are trying to navigate athletes you are passing.  I felt like I had better vision, it fits snugly but is still easy to put on and I still had my senses in it.  I got a penalty at 70.3 worlds trying to work my way through the field and I think part of it was a lack of awareness of what was actually BEHIND me.  This will not be the case in this helmet.  I think the Rudy helmet is the best aero helmet I have ever worn for all these reasons.

Add to that the decision to move to Highway 19 wetsuits.  I think my swim form is actually pretty good right now thanks to some most excellent coaching from Cindy Maybee at Island Swimming…but in the race on Saturday I totally and completely bonked.  I steadily moved backwards from third position on Kirsten’s feet (I had an awesome first 200m) to the back of the main group to dangling off the group because I just plain got tired swimming that hard in a wetsuit I only spent 800 slow meters in.  Remember, this is early season and that swim was hard!  Those girls were caning it back to transition.  The Hwy 19 Rogue made such a difference for me that I was still two minutes closer to the front group BONKING in the swim!!  Wetsuit + bike = a heck of a lot less chasing in the race.  Awesomesauce.  Two most excellent decisions made over the winter.

My third decision was to partner with Polar heart rate monitors.  I have access to some awesome support now with the new RCX5 and have the option of GPS or foot pod pace monitoring for running which will certainly appeal to the nerd brain I have for numbers.

I kept the stuff that I thought was really working well.  I started off with Champion System clothing after winning the ITU Cross Triathlon worlds last year and there is no turning back on that.  Their cycling and triathlon clothing is so comfortable, functional and good looking so I plan to stay with them as long as they will have me.  Thank you so much to Stacey at Trek for designing this year’s most excellent outfit!!

AVIA is only making better shoes every year and since I signed with them my run has improved year after year.  Now that they are making an off road specific trail racing shoe things are just getting better and better so they are also on my favorites list and back for another season.

Powerbar is not only my partner but now is an XTERRA partner so I don’t even have to carry my nutrition in races…. It is stored like Easter eggs for us to find out on course!  So great for me and it is a great fit for all the lucky off road athletes that get to try it.

Of course Shimano is back because I will be a Shimano athlete for life.  Let’s put it this way, there are 19 teams at the Tour de France.  7 are sponsored by Campy.  2 are sponsored by SRAM.  2 are sponsored by Shimano.  The other 8 are BUYING components from Shimano.  It is that much better.  There is no other option I would choose other than Shimano, forever.  No doubt Di2 was an advantage this weekend when my fingers were numb with cold.  Shifting levers would have sucked… touching a button: magic.  There is no question being a Shimano athlete is a DISTINCT advantage on and off-road.

I will continue to ride my Powertap wheels as well only this year… I can even RACE with the Powertap as it will be built into my race wheels.  Good times!

There are also my other partners who have stood by supporting me for years:  USANA, Genuine Innovations, TP Therapy, ESI grips, Saltstick and the Procity Trek store in Victoria, BC (who have supported me for years no matter WHAT bike I was riding!!).   Also GoPro, Wiink2 in Millstream and Saunders Subaru are friends helping me do what I do.   Let’s do our best to kick it up a notch this season, why don’t we.  There is much unfinished business that must be addressed.  J 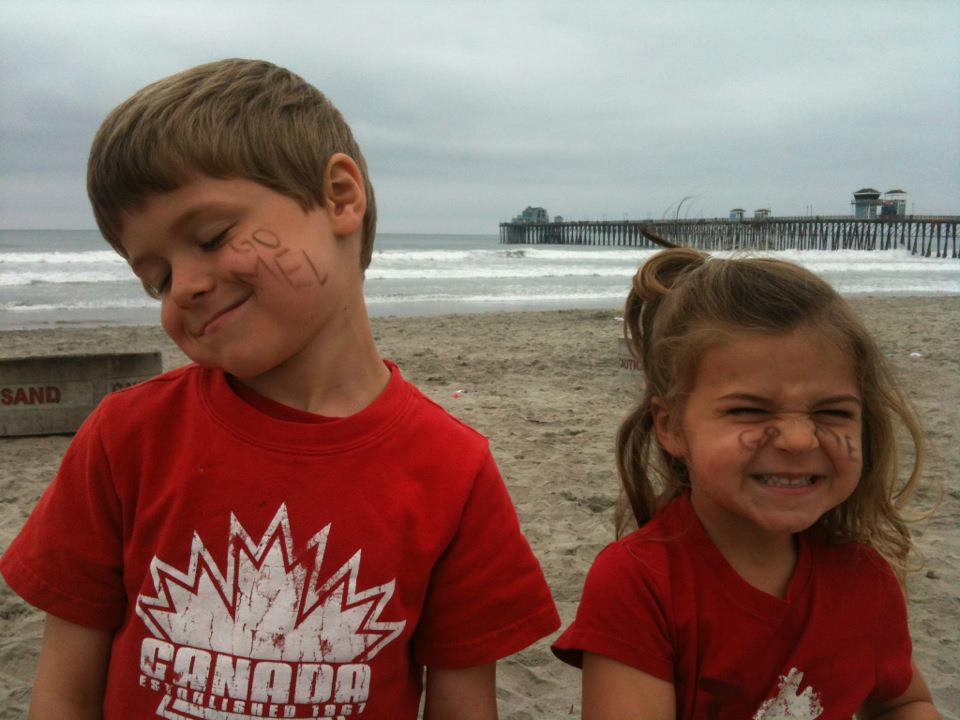