Instead of a RGTV episode this week, I am going to share with you some excellent videos from the Furious3 race I just visited this Canada Day long weekend. The Ride Guide was there filming and their videos are much much better than mine!  If you are only going to watch one, check out Stage 2 where you can see that crazy bird that I think everyone was playing “chicken” with on the trail.   So funny!

This was my second visit to the spectacularly beautiful town of Fernie, BC., a coal mining town tucked far back in the eastern corner of British Columbia. The race included three stages that all started and finished either in town or within 10 minutes of town so it was super easy in terms of staging and was so professionally organized.  It was a super event that should definitely make your wish list.  I am looking forward to the race in Moab this September which is going to be a key training component in my lead up to the World Championship in Maui.  I think all you XTERRA types that are racing US Nationals in Ogden should consider the Moab race that starts right after.  The event will definitely set you up for Worlds perfectly.  Check out www.furious3.com and consider your options.

For Furious 3 Fernie, some of the trails we rode were familiar from Transrockies TR3 last year but most of it seemed either new to me or in the opposite direction from the race last year.  The biggest change was the weather: WET.  Last year at TR3 was primarily DRY.  Weird summer weather has created massive flooding all over BC and very late melting in the snowpack so even if the actual weather wasn’t terrible, the area was just plain WET.  This made conditions difficult in terms of technical challenge, mechanical challenge and was challenging my mental fortitiude in the first two stages.  However, Day 3 was sunny, there were only a few massive mud bogs and I think my skills started to almost improve so by the end I was learning how to ride again.

There is no doubt these races are important to my offroad triathlon toolbox.  Especially in years like this one, where I choose to spend a lot of the winter improving my riding on a time trial bike, I am missing the technical skills I usually gain in winter from riding my mountain bike in the sloppy wet conditions.  My technical skills on a mountain bike started out horrible/embarrassing on Saturday and approached just average on Monday.  By the end of my next stage race maybe I will be able to ride the gnarly like a pro again.  Maybe. For this weekend Mical Dyck and Kate Aardal put on a clinic on how to be fast taking first and second spots and I ended up in third but a distant not in sight third place. Very fast riding by those two.

My first race on my 17” Trek Superfly 100.  I rode an XTR 40/28 front chainring which was an excellent choice for doing legpress and getting strong but if you don’t ride professionally you might want to race the steep stuff in Fernie with the smaller 38/26 option.  With bad legs I struggled the first day with lack of momentum! Read more for the rest of the story…

The race began with a nice long road/dirt road warmup.  I was fine riding in the pack but as soon as we started uphill I shot out the back.  I had NO power in my legs the first day and no amount of Powergels was remedying the situation.  Too much running, not enough TP Therapy or too little recovery or all of the above is the culprit.  Then, as it turned out, I couldn’t ride it downhill either.  I crashed early in the downhill on steep singletrack and then lost my nerve and let about 10000 people ride by  me before I chose to hold up Rob Hewitt who was so nice to just let me cruise along.  He is a fantastic BC rider I know from pro mountain bike racing who is legendary in his downhill skills.

The other legend of the day is this guy who I could barely outride on the uphill to have him come screaming by me on the downhill for a lot of the day.  So impressive. 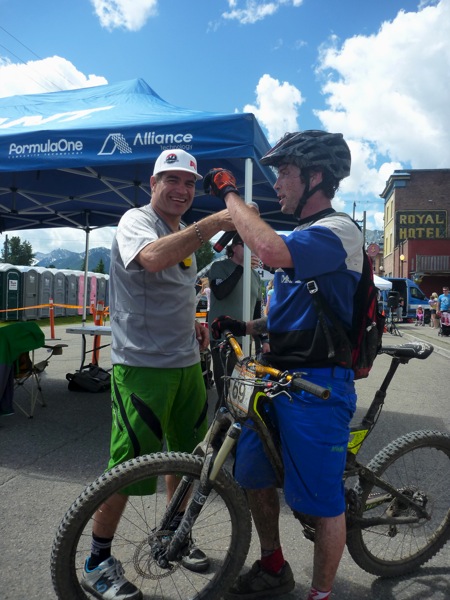 Day one I was absolutely crushed by both Mical and Kate (theme of the weekend) and thus out of the running for the overall.  This honestly didn’t matter because my technical skills were frightening and I really just needed to ride within myself anyways.  Risking injury at this event to try to keep up was not good decision making for a triathlete and I just needed to get my sh*t together in my own time.   I ended up 4th with a girl named Rose who can descend really well riding to 3rd.  Thank you to the Hewitts and Rhett Losey for encouraging me all the way to the finish.  Thanks to Bruce Dickman for introducing me to ProGold Lubricants which overhauled my muddy machine nicely!

Lots of rain.  There was a significant amount of singletrack in Day 2 which was promising to be muddy.  Off the start I had a bit of power which I was stoked to realize.  Unfortunately, riding a brand new bike has its drawbacks and one of those is that sometimes you realize you need to make changes on the fly.  I needed to stop twice that day to first adjust seat height which I had messed up that morning and then later I stopped again to move my saddle.  All told there were four roadside repairs which could have been avoided by getting it right the first time.  The first time I stopped I lost Mical who I was happily trailing to make myself suffer for awhile and find some good pace on the uphill.  She was riding so well at Furious 3.  Then, when I lost her, I managed to stay with Kate for a while before I had to stop again to fix the seat and lost her.  I was actually riding uphill much better but I never would have stayed with them anyways on the downhills as I was losing gobs of time in the greasy sketchy conditions.  The Bontrager tire I chose was good for cutting through the mud but did not have good side knobs so I was crashing a lot on anything off camber.

I loved this one bird that was chasing my wheels.  It was like a dog!  Watch the video to see it chase other people too.

Rose caught me late in the race as I was losing mojo rapidly after I missed a couple turns.  The good part of stage 2 is I was starting to figure out how to ride technical, could almost ride a bike uphill and after some on the trail adjustments was getting a lot more comfortable.  All of this would have been better in non-race training but when the race is your training that is the time to do it.  Solid day on the bike and some really, really fun trails up there at the Fernie resort that I enjoyed thoroughly.

Sunny day, yay!  When the field assaulted the first pavement climb I was mystified: “why bother?” I was thinking. Big mistake.  The maps had changed before the race started so I didn’t look at any of them before any of the stages and this is the stage where knowing even the start was kind of important.  I figured we would all start to come back together as the road flattened out but I was wrong, we bottle necked into a piece of singletrack and I stood around waiting to get moving again for at least a minute and I am pretty sure Mical made it in top 10 and rode away.  I could see Kate riding a couple switchbacks up the hill and thought maybe I could get back to her but another time off my bike waiting and it was over … that is the last I saw of the two lead girls as the boys I was riding with were not racing as hard.  I knew I was in trouble when the pace on the singletrack was too slow for ME.  When we got out of the singletrack the top 2 girls were nowhere in sight and I hammered away from the guys I was riding with (who were so kind and did try to let me by but honestly, it was too skinny to get anywhere) and I ended up riding mostly alone for the rest of the day. 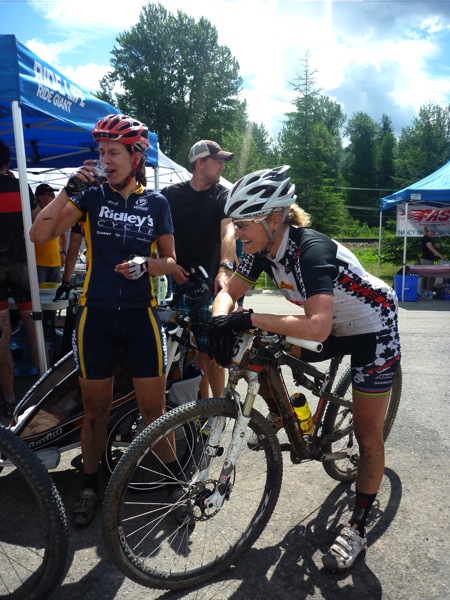 The conditions were much dryer so I had was more confidence in the singletrack but I think my pace overall for the day was too slow as I was still in another time zone from the leaders who were battling head to head.  I would have loved to have been nearer to them to try to get pulled along for a while but in the end I still had so much fun that day on those trails and I did manage to pull myself back into third place overall so I would gauge the race a resounding success.   I also had the chance to strap on the Avi-Mantis and log a solid 1h run off the bike on the fun Fernie bike path with MC before destroying a big fat burger at the Bridge.

Unfortunately my flight left too early to make the awards dinner but with travel again on Thursday I had to make my way home right away.  Three days of awesome, awesome training!  Thank you Mark and all the volunteers for a fantastic racing experience!  I can’t wait to give it another go.

I can’t stress enough how beneficial these types of races are for us half Ironman and XTERRA athletes.  I may not have been impressive this weekend but I am confident I am on the right track.  Next weekend I have an altitude preparation event in Utah at the Fireroad DirtFondo.  Should be awesome!