Cedar City is a town of about 28,000 in the southwestern corner of Utah near to St George and the Zion national park.   The ski resort Brian Head is nearby as is Southern Utah University.   It looks a little old fashioned with its soda shop in the drugstore, tons of knickknack stores and a cute little main street.  Those are juxtapositioned against the new aquatic facilities and the Starbucks.  Cedar City is, as it turns out, is a pretty sweet place to train.  The Multisports mafia have known that for years as Cedar City was their altitude training grounds when Paula, Heather, Roch and Paul were in the thick of triathlon domination.  Now they run training camps out of the city which you might want to try.  I went for a one day training camp for the Fireroad 100km Dirtfondo which is exactly as it sounds: a 100km grandfondo on dirt.

Despite the fact I train full time, 100km on the mountain bike still sounded daunting, especially given the majority of the ride was up over 9000 feet of elevation.  However, with Beaver Creek on the menu one week later there was no time left to get my butt in shape and this event fit perfectly.  If you imagine an organization experienced in putting on events with 2000+ people, you’ll see why this event was so excellent in terms of logistics, athlete care, and organization.  A super pro race with a grassroots type feel was enjoyed by all of us.

I did see quite a few XTERRA t-shirts milling around over the course of the weekend so it looked like quite a few people had the same idea that I had.  This race was perfect training both for the mountain championships that are coming soon as well as the US Championships that will be held in September.  Nothing like some massive big climbs to whip your butt into shape for races with massive big climbs!  Kudos to you XTERRA types for doing some smart thinking.  The race was also excellent prep for the numerous Leadville 100 competitors who will be racing in August.  Jay Prasuhn from Lava Magazine is one of those brave souls who came to the Fireroad 100km to tune his engine.  I think the event helped all the Leadville folks to test their plan going into their main event so if you missed it this year you might want to add this one to your plan.  They also offer a 25km and 60km option if you aren’t sure you want to ride that far.

My plan was as follows: try to win the KOM on the first 7 mile climb and then try to stay with whoever I could for the rest of the day as long as the pace was comfortable.  Mike Dannelly from American Interbanc put up $1000 for the fastest man and woman up the hill which motivated the suffering.  He kicked my butt up that climb as well so next year I need to try to win the $ and beat the sponsor!  J  Thanks Mike!! 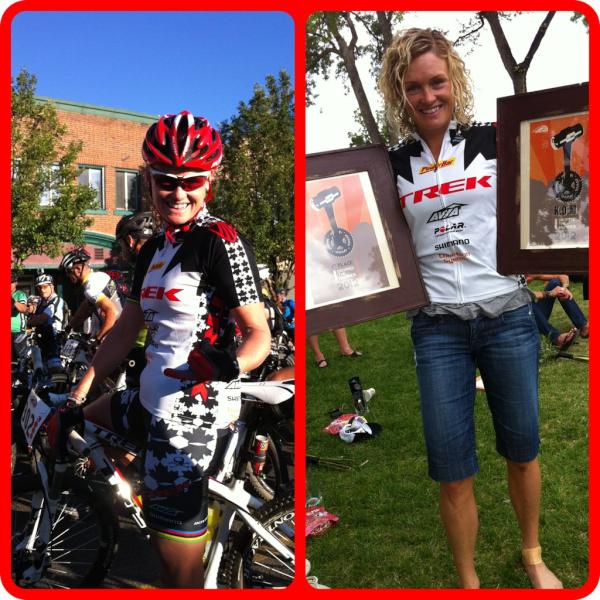 This is how it actually went: I first drafted the lead moto on the neutral rollout.  Then I drafted a superfast tandem for the rest of the first flat bit.  Michi Weiss was somewhere behind said tandem as well.  Then it tipped upwards a little, the tandem was off the front and a strong group of guys set the pace.  I stayed in the lead group until it shrapneled to a million pieces on the KOM climb.   I felt good for about 1 mile of the 7 mile KOM and was dropped about ¾ of the way up by some fast men that I wanted to stay with but I kept them in sight.  Sadly, none of them stopped at the aid station after the KOM line so I could never get back with them so I rode alone the whole day.  I think that was the best case scenario.  I chose to just ride a comfortable pace all day, stopped at EVERY aid station to refill my two empty LARGE water bottles (adding up to 12 FULL LARGE waterbottles completely consumed in one race!) and basically just enjoyed a fun, scenic and enjoyable ride for 100km.  The race went by very quickly in fact and before I knew it I was on the last 20km which is almost entirely downhill… so really you only have to giver for 80kms. It was an excellent day.   There was an absence of professional women mountain bike racers due to the fact the US Nationals were happening on the same day… but I am not sure where all the Canadian ones were?

I downloaded my Polar heart rate monitor (I used the 800CX so I would have altitude measures… and the last 30 minutes is my little run off the bike) onto the Polar Protrainer software.  You can see that at about 2000m of elevation I was suffering and that level increased the higher I went.  This corresponded to the point in the climb to the top that I just let go and went what was comfortably hard for me at that moment.  I find I have to be careful not to bury myself at altitude as it can take a long time to recover which perfectly illustrates why I need to go to elevation early to have any chance of competing with the best girls at altitude.  It crushes me if I am not prepared.

My heart rate was dropping steadily all day as I got tired and I got extra tired because the elevation was putting the boots to me.  Altitude LOWERS my heart rate rather than increasing it which is kind of the opposite of what other people find.  I think it is because I just can’t go as hard so I have a lower output overall.  The second 10 mile climb in the race, although less steep, was powdery and loose and made kilometers 50-70 a challenge.  The steepest part of that second climb was also the deepest and slowest and it was at that point I was picking off some shrapnel from the men’s group in front of me.  Easily I could have cracked as well if I wasn’t careful.

Comparing the numbers from this race to that in Richmond… you can see how much less I was pushing in preparation for my race next weekend… even the KOM averaged only 179bpm.  For those in the Polar RCX5 contest… here is your sneak peek at the file from Richmond that I took off the www.polarpersonaltrainer.com website to compare to this one in Utah.  You can see whether your guess was correct! 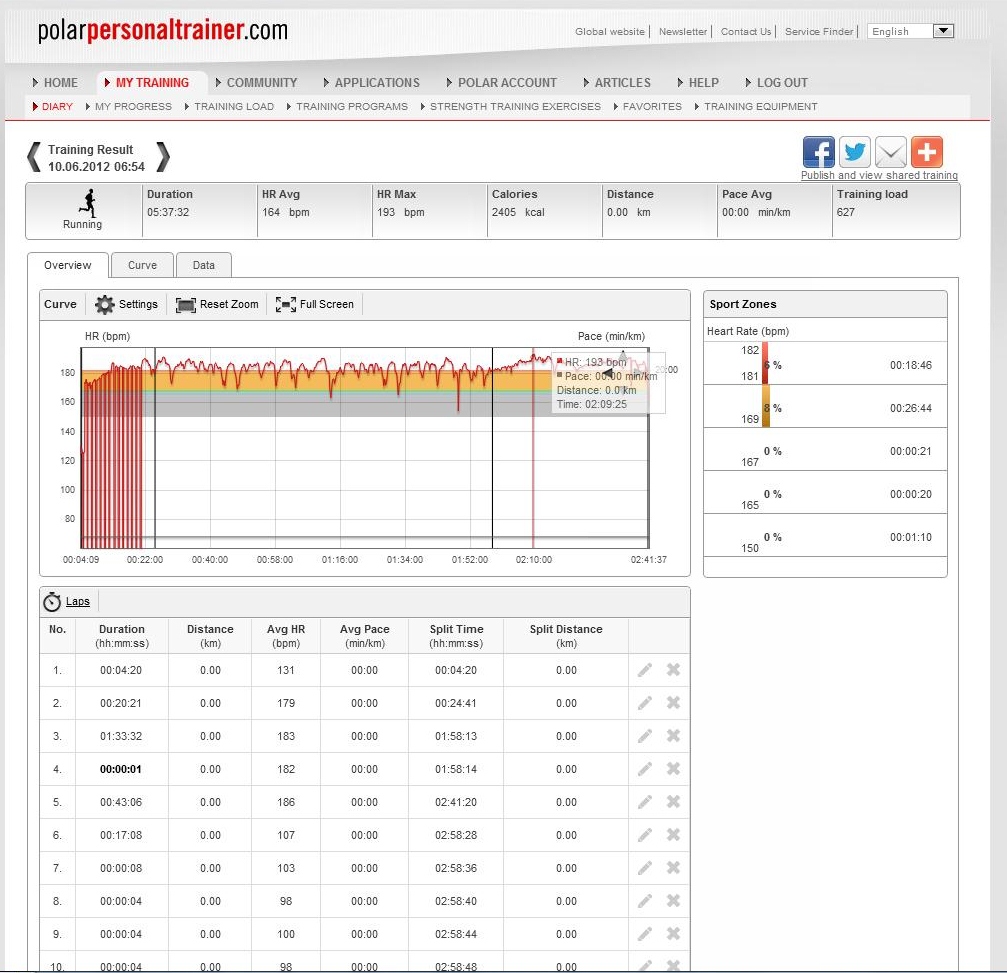 So now most of the hard work is done for Beaver Creek.  I am hoping to have a good result there to show some good form going into the upcoming 70.3 events in Calgary and Boulder.

Thanks so much to the team at Multisports (Roch, Huddle, and Heather in particular for being so awesome this weekend) and to the awesome competitors in the race.  Thanks to Karen, Shawn, Kristin, Sonja, Blaise, Jay and Gavin for hanging out with me.  Thanks to all of my sponsors and to my support team at home.  Big extra special thank you to Paul McIntyre at Broadmead Orthopedic Physiotherapy for finding out why I was feeling crappy.  I actually managed to create a “niggle” (haha, inside joke) in myself that I underestimated the damaging effects of… thanks to Paul I am back on track.  Also big thank you to Markus Blumensaat at Left Coast Health massage therapy who has been managing my muscles and my crazy brain… those Olympians are lucky to have you buddy!

I am feeling pretty good about the coming weeks.  More after Beaver Creek…

Hope I am charging as long as this guy.  He’s STILL getting interviewed by Jay #longevity