The first race on the XTERRA tour in years past always seemed really early and my fitness was always a mystery coming straight out of Canadian winter to toe the start line. This year the race was even earlier but unlike past seasons, I already had some hard racing in my legs to take the guesswork out of my form.  With gorgeous, sunny weather to enjoy the day, I took the win at the first race of the XTERRA season  with a “measurable delta” (we love you Mark Cote!) to Shonny V second, Christine Jeffrey third, Kelly Cullin fourth and Danelle Kabush rounding the podium in fifth.

I really want to thank Day Deans Buchan-Cedar Hill Sports Therapy Chiropractor, Paul McIntyre-Broadmead Orthopaedic Physiotherapy, and  Markus Blumensaat and Chelsy Low- RMTs at Leftcoast Health for turning this injury around for me.  I really wasn’t sure if I could handle the extreme terrain of an XTERRA after I finished the 70.3 in Oceanside, so winning this weekend is a testament to how awesome these therapists in Victoria really are.  Thank you thank you thank you!!

Also a big thank you to Specialized dealer Las Vegas Cyclery.  My bike was shipped in advance to their awesome store where I just had to roll in and pick it up good to go.  I never could have felt so comfy arriving late without that hookup.  Thanks so much you guys!

The day started with a really chilly wetsuit swim.  I decided to try a longer swim warmup this race (I am testing different strategies to improve my splits) to see if I would start better and I wonder if that was a good strategy.  It seemed good as I was main pack all the way to about 500m in my speedy Profile Design Wahoo wetsuit until we rounded the second buoy into a current and I was suddenly dropped.  Crappy.  By the time the cannon went off, my feet were numb and I was frozen so halfway into the swim I was feeling terrible.  I would not get in so early again for sure in cold water. Still working on it!  I got out probably right where I always do in a wetsuit swim with a big gap to Christine.  I heard that many people were really, really cold after this swim so I am wondering if it was 60 degrees or maybe more like low to mid 50s?  I decided to make sure I ate ALL of my Powerbar green apple Powergels on the bike since I obviously burned a lot of energy shivering for over 30 minutes!! (I got in REALLY early.. )

Out onto the bike I was so cold that I had a hard time getting my Sundogs and helmet on.  My feet were numb which always makes it tough to really power on the climbs but I am sure it was the same for the entire field.  I think that putting socks on cold feet might be a better strategy in these conditions but not knowing how fast I could go this weekend I wasn’t willing to let time go in transitions.  I had a good rhythm for the bike and I don’t think my legs were overly affected by the half Ironman.  I was maybe a little off on the super punchy sections?  That probably had more to do with not much mountain biking so doing some more XTERRA events is definitely going to help me feel sharper on the bike offroad.  I rode the Specialized 29er Epic and I swear the bike did all the work.   I was just steering while it smashed through everything.  Thanks to my pre-ride with Trevor Glavin, I had the good lines but I still managed to come off the bike twice in traffic.  The course in Vegas is deceiving as although there aren’t obvious technical obstacles riding it FAST is technical.  I have the new Shimano XTR 40×26 front chain rings and that is the best combo ever!  You can almost ALWAYS ride big ring which makes you feel like a hero and helps you to maintain momentum better.  My other new fun product is the new Maxxis Ikon 29er tire.  Wow.  So awesome for cornering in sand and on sketchy marbles!  I saw Jeff Kabush and Catherine Pendrel riding that tire at BC Bike Race and now I feel pretty cool to have it too.  I think that will be my new go-to tire for 2011. 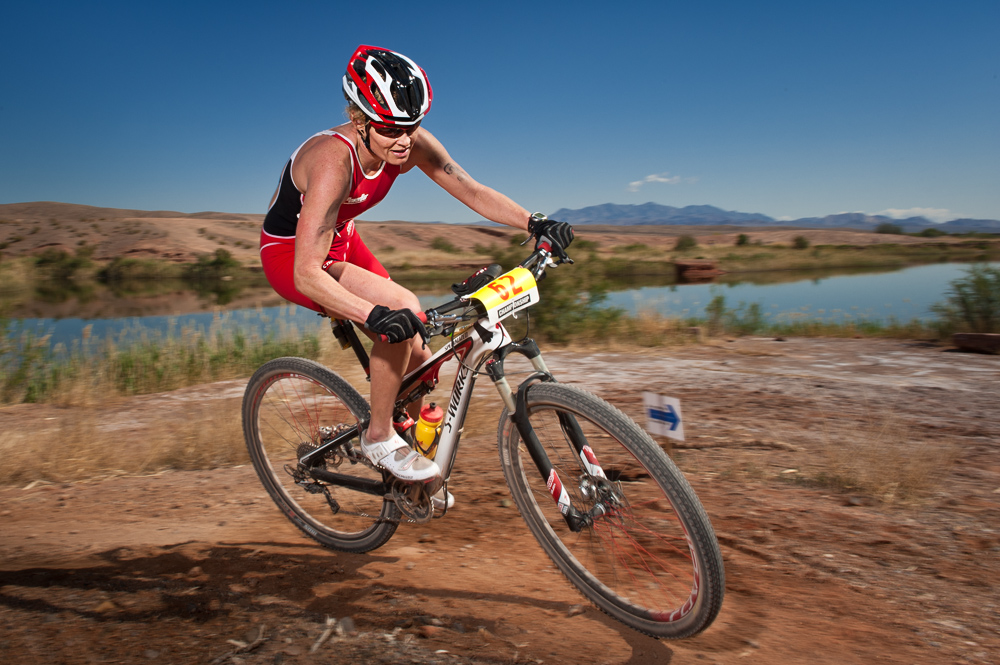 Coming into T2 I wasn’t sure where I was.  When I started the run I got fired up to fly as I was feeling fresh off the bike but then the rational part of me decided that protecting my gimpy hip was a better strategy.  I grabbed my Nathan race belt and with still useless hands, put it on upside down!!  Luckily my feet finally unthawed by the second half of the run because the descent was pretty steep and having some proprioception in my feet was nice.  I haven’t seen the splits yet but I probably lost time on that run because both Shonny and Christine are really good offroad runners but it was a LOT better than I felt in Oceanside so I am definitely coming around.  I ran this weekend in the new AVIA Bolts and I absolutely LOVE them!  In fact, all the girls (me, Emma, and Shonny) who were wearing them really like them.  Sock free and not a blister on anyone.  Give them a try!

Thanks to the awesome organization from Team Unlimited we could do a pro podium in record time and I was able to make a flight out right after the race.  It was very nice to erase the memory of the 2010 Worlds with a solid start to the 2011 season.  You are only as good as your last race, remember?

It was also really nice to say hello to the XTERRA crowd again to kick off the year.  It is like having two families, this road and offroad thing, since such different athletes compete on either side.  I like the mix!

It is a tough go as a pro and I am so thankful that I have good form right now and I plan to enjoy every opportunity that I get to push myself hard!  It is great to have some new faces in the pro field including Kelsey Withrow, Jessica Noyola, Kelly Cullin and Rosemarie Gerspacher.  Welcome ladies!  Congrats to all of the competitors this weekend, it was a tough race and a worthy challenge of the West Championships.  Congratulations to Josiah for kicking off 2011 with top box in the men’s race and good job to my Specialized teammate Conrad for second, Branden Rakita third, Nico Lebrun fourth and Brendan Rehula for fifth.   See you in Texas next week! 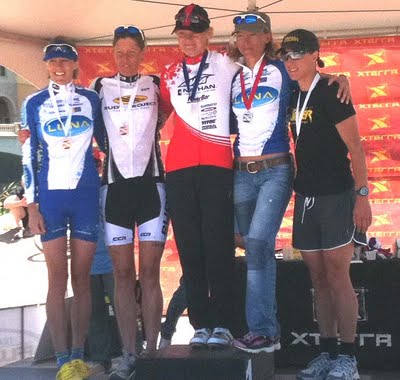