Success!  I was totally stoked to continue my streak of four wins in a row in Utah at the XTERRA USA Championship at Snowbasin on Saturday.  In doing so, I also ended the XTERRA US Pro Series in first place as well and took home the (literally) big check that goes with it.  The podium in Ogden was amazing with myself, Scottish superstar Lesley Patterson, Danelle Kabush, Kelly Cullen and Emma Garrard lining up for the women and Nico Lebrun, Dan Hugo, Josiah Middaugh, Conrad Stoltz and none other than uberrockstar Lance Armstrong taking top 5 for the men.  After the race it seems that some of the rumours and stories may not have been 100% validated but he did say our sport is cool so that is enough.  It was an unbelievably amazing day of XTERRA racing and I am so stoked I was a part of it. 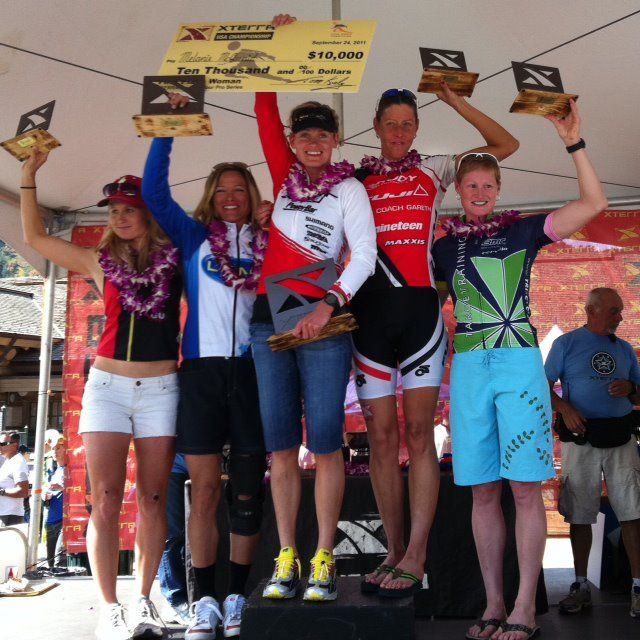 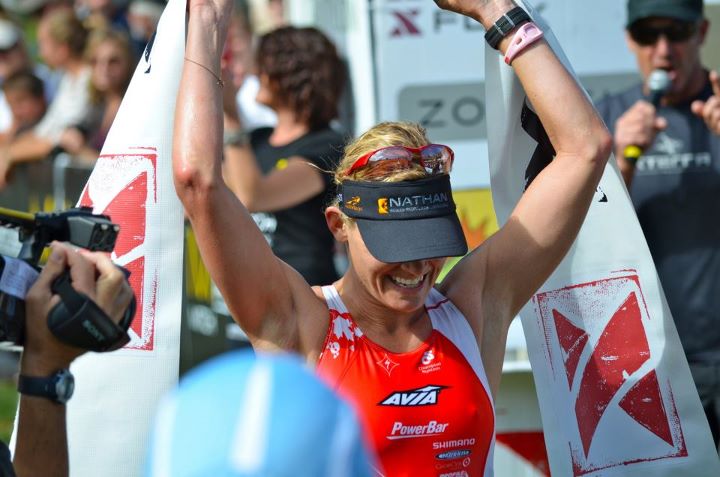 The one bummer of the whole weekend was the fact Shonny Vanlandingham was injured.  I certainly was hoping for a barnburner showdown in Utah as that is the whole reason I did that stupid back to back Saturday XTERRA and Sunday 70.3 weekend the weekend after a 70.3 in July: to get points to fight with her properly the title.  Her finishing the race in 7th was a testament to her fighting spirit and we will certainly miss her at the Worlds this year as defending champ.  Here’s hoping she’s back at it soon.  It was awesome to have Jamie Whitmore back racing as well.. she is definitely an inspiration!  Congrats to my MelRad Racing team with Lance, Keri and Meiling carring the flag (most of the team is saving up for Maui).  Keri led the charge with an AG win, Lance took 30 minutes off his time and Meiling was strong just over a month out of knee surgery.  Very impressive.  Dee was our fearless and motivated captain all weekend, thanks for coming!  Also a shoutout to Nat Grew.. who at 74 did an awesome job destroying the course on Saturday.  Way to go! 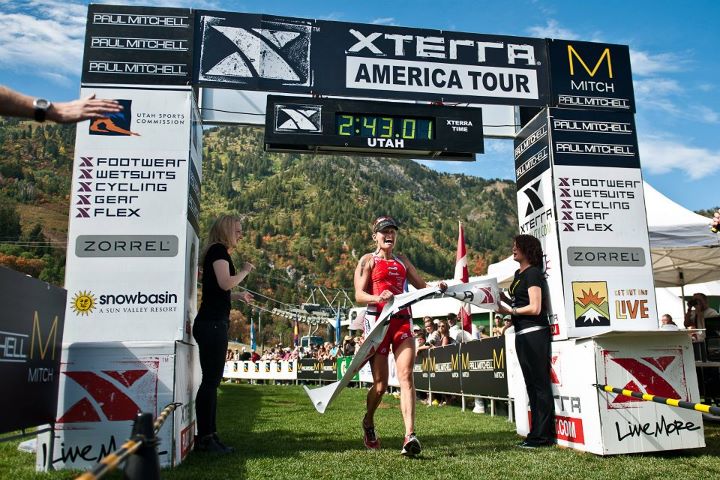 Ogden really put on a show this weekend.  I always say that Utah has all that Colorado has to offer with the mountains, the altitude, the cowboyness but all wrapped up in a super polite, friendly and mellow package.  I love Utah. 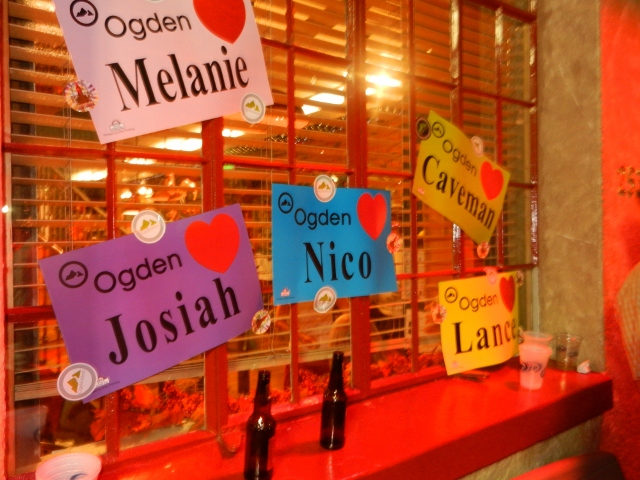 The awesome signs everyone was holding at the race

Although I love Ogden the most for racing, I am completely head over heels for Park City for training.  I had the most amazing homestay with the Karz family.  When I was on my way to Utah I picked up a magazine in the United lounge and inside was a 5 page spread on the Karz house.  There’s a first, seeing my homestay in print before I get there.  Their house was designed with all things environmentally sound in mind.  It was fantastic.   The 10 days I spend training in Park City with Mical Dyck, Chris Jeffrey and Emma Garrard were perfect and I arrived to the base of Snowbasin on Friday ready to go.  One quick tv interview, a fun night celebrating all the age group regional champs and off to bed I went thinking about going fast the next day.

I am choosing to ride the Specialized Fate hardtail 29er for the rest of the XTERRA season.  The bike is first off, ridiculously light.  Second, the geometry fits me better than any other bike I have ridden and third, the chainline is perfect for my Shimano 2×10 XTR.  I really love it and it was absolutely the right bike for the new course.  The Snowbasin folks have built a fantastic trail called Sardine Peak which is a super fun and challenging climb but offers very little technical challenge so carrying suspension up there didn’t make much sense to me.  The course was much faster and less technical than in the past.  However, that didn’t stop me from losing my Powerbar bottle on the first descent when the cage broke.  Bumpy maybe, but technical?  Not so much.

Race morning I drank a little more energy drink than normal because I had been getting weird muscle cramps all week.  I also put more Saltstick in my Powerbar perform drink as I think the dry air and altitude were dehydrating me more than I expected.  I think this was a good choice in the end since I lost one of my bottles.  I rode down the back side of the mountain to the start with Mical which was FREEZING.  Not a great choice this year.  Getting into my Profile wetsuit and jumping in the water was warmer than standing around in my clothes.  Brrrr.

The swim start was perfect and on time.  Ben Allen rocketed out the front from the right hand side and the lead group was very very fast.  It also included Lance Armstrong which was super impressive.  I was disappointed with how much time I lost to them but I did get out with a group of pro men that have been beating me by a minute this year so I think my swim wasn’t bad.. the front was just extra fast?  Not sure.  However, I had my work cut out to catch CJ.  Which I did going up the second half of wheeler canyon.

She was hard to shake but once I did I was pretty much on my own to almost the top of Sardine Peak at 7300 feet.  Surprisingly, I caught Craig Evans (unheard of.. he had a bad day) and Tim Deboom (the most exciting thing that has ever happened to me in a race – LEGEND).  Craig and Tim were all class letting me lead the downhill given that I was messing up EVERY corner in my mad dash/spazz attack for the bottom.  Really I should have let Craig go first and we would have all been faster.

A quick transition and I was off on the run.  My legs felt pretty good but I am really not that fast on this uneven, embedded rock stuff.  Last year I dislocated my cuboid on this course and ran VERY slow.  This year I just kicked back and ran carefully.  I think I had more in the tank that I couldn’t get out because I was unsure about the footing.  I actually did a LOT of work with a TP Roller before the race under the advice of Cassidy Phillips to improve my proprioception which I think helped for sure but there is still improvement to be made in that kind of terrain.

The run course was a bit longer this year with more technical running on the downhill which created quite a few casualties in the women’s race.  I know both Emma Garrard and Sara Tarkington took nasty falls.  I had that in mind when I knew I had a lead on Lesley but her fast feet were going to out run me (and most of the men’s field) anyways so I wasn’t easing up.  I think with a bit more bravery I might have saved a bit more of the lead but I was certainly careful as I catapulted downhill. I was passed by Craig and by Tim Deboom as they were running so much better than me and I started to get down on myself for getting dropped until I realized I was running with AWESOME pro men and I should be stoked.  My run split was around top three for the women in the end and I had a large lead still at the finish to use high fiving and enjoying the finish line chute. 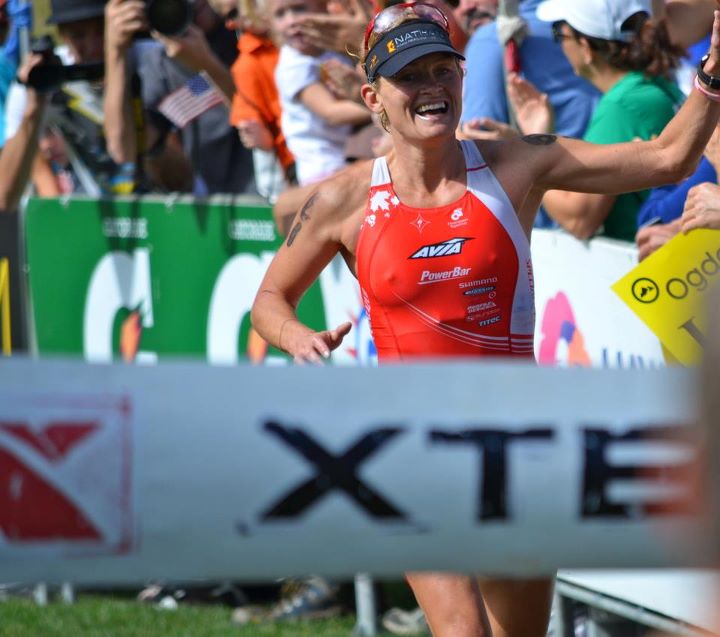 The best sight ever is the tape waiting for you at the finish line.

Thank you Nathan, Shimano, AVIA Running, Specialized, Powerbar, Sundog Eyewear, Maxxis, Profile Design, Titec, CycleOps/Powertap, Saltstick, USANA, Genuine Innovations, ESI Grips, TP Therapy and Go Pro.  I am on my way to Brevard, North Carolina as I start the Pisgah Stage Race on Tuesday.  This is my main training block for the Maui World Championship.  Let’s hope my MelRad teammates Fred Smith, Kate Button and I all keep it rubber side down this week!

The official race report is here at:  http://www.xterraplanet.com/news/press_article.cfm?id=3154 if you want more background on the men’s event.  Enjoy!