On Sunday I managed to make it 2/2 in the XTERRA Pro Championship Series with a second win on the twisty technical course at Cameron Park in Waco.  I think the mood at this race could not be beat.  Everyone was happy to be there, stoked the course was fun and was being drenched in Texas hospitality to the point you just didn’t want to leave.  Definitely a different race course than last week with us overheating in wetsuits and enjoying a warm sunny day of racing on actual trails that are fun.  The top five changed a little this week although Shonny and Christine Jeffrey were again right behind me (Christine throwing down the fastest swim… of ANYONE!) with Suzi Snyder taking fourth and my Specialized teammate Emma Garrard rounding the podium in fifth.   Watch out for Emma.. she has been in winter tri mode until 2 weeks ago and is already moving up the podium!  Texas is Shonny’s course and it took everything I had (mainly only a better swim)  to beat her as she is going well and it was on a course that suits her very well.  There was a shiny belt buckle on the line to up the ante – so I think all the girls were bringing it in Waco. 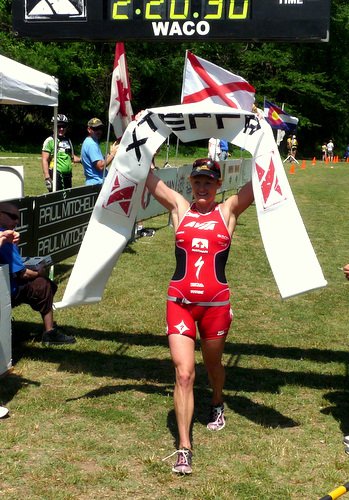 The race photos are from XTERRA Offroad’s Facebook Page

The main shoutout this week goes to Ian Moore from Bicycles Outback.  We had a great evening at his store on Friday with Conrad and I holding court with a number of triathlon keeners while those who were only mildly interested drained the keg.  Ian is the only reason I made it to the start line on Sunday after I detonated my chain and derailleur the day before the race.  Note to self:  when you fix a link of your chain, make sure it still moves or else it is going to get stuck in the pulleys of your derailleur and bend it to crap.  If Ian had not actually put HIS OWN chain, shifter and derailleur from his bike on my bike I wouldn’t have been racing since I had not brought spare parts this trip.  Given Ian was once upon a time a world cup mechanic to the top racers on the WC circuit he is beyond capable of fixing anything but my derailleur was unfixable.  Thanks for the vital organ donation to my bike Ian!  The athletes also have Ian to thank for putting tons of energy into making Waco a stop on the tour this year and for getting important sponsors like beer and a DJ so people can have fun watching.  They do it right in Texas!  Read More…

My trip started with a night with MelRad racer Lance Thatcher and his wife.  I had a nice evening of swimming with the local masters group and then a light dinner before early to bed.  The next morning we packed up and trekked to Waco where Ian had my bike all shiny and good to go for pre-ride number one.  They also packed my bike for me on departure.. this trip was one I should really NOT get used to

.  I did half the course with Lance, Dave, Dave and MelRad alumnis Frank and Stoff.  I then jetted to my Waco homestay at the Miars’ family residence.  So great to see all the girls and learn about the new addition coming soon.  Congratulations Chris and Meredith!

Saturday I went out and destroyed my bike with Fred.  I dunno how it happened but it did and I limped it back to Ian sheepishly but not really realizing how serious the damage was until he was telling me I was going to be riding a new shifter.  Hmmm.  Not ideal.  I was getting a little stressed out so when Ian said to leave it with him to sort out, I went and got a pedicure.   Out of my control at that point and nothing like pampering to take your mind of your troubles.

That evening I had a race bike good to go and nice shiny toes.  I had an awesome night’s sleep and woke up relaxed and good to go.  After I got to the venue I rode the first bit of the run course (looking for pandas in the bamboo) on my way to transition and was shocked to discover it was a wetsuit swim.  This past Sunday should be known as the swim snafu Sunday with New Orleans 70.3 cancelling the swim outright and some wacked out thermometer trying to read less than 74 degrees in an obviously VERY warm river.  With no change in weather and 74 degree water the day before I think the call was highly suspect but that was the call.  I had no way to get my Profile Design wetsuit since my homestay was too far from the course to make the start of the race.  I was debating how much time I was going to lose without my wetsuit when a number of women offered their wetsuits to me.  One sweetheart was even trying to give me her suit for her not to swim in it.. which I was adamant she was not allowed to do.  I did get a sleeveless suit from a half distance racer which I thought was the best option for warm water and a suit I have never tried.. it just so happens that Kirsten was the first half distance racer out of the water!  Thanks for getting your suit to me in a timely manner!  Once suit-ably attired I hit the river in time for the start and  I came out of the water 2.5 minutes behind Christine- which isn’t bad for swimming in a weird suit.

The only consequence of the wetsuit debacle was the lack of bike warm up and the neglected tire pressure check.  I could feel that it was low as I rode into transition but I had other things on my mind and didn’t put any air in.  Immediately starting the bike I made note to be very careful with my lines as I was dangerously low.  Another not ideal situation was that the chain Ian had was a tiny bit too short and didn’t really want to work with my big ring and the higher cogs since I have an enormous 36.  That meant I rode in my small chainring for the whole bike.  It was interesting to me how well I did go spinning my face off and I think that too often I ride the big chainring just because it is cooler.. not because I really need to be in it.  Not ideal but was good for saving my legs probably as over-gearing can blow your legs to pieces.  I gave away a lot of time on that bike course just from not having ridden it all or having been on it much.  I made far more mistakes this year including a pretty major miss of a turn which had me stressed.  It was not my finest mountain biking and I knew even if I was riding my best Shonny would be riding that course faster.  I took an extra Powergel in the final stage of the bike knowing that I was about to run really, really hard. 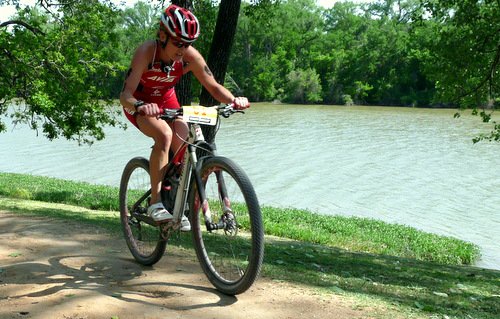 I didn’t know how close she was when I left T2 but I didn’t waste any time getting the run done.  I was a bit faster getting into my AVIA Bolts as they are breaking in a little so my transition wasn’t bad.   I ran as hard as I could and had no pain in the leg throughout.  I must have lost some fitness without any training other than racing for 5 weeks because that run did not feel very good at all.  It was perfect weather and a relatively short race but my legs were not springy.  I was going really hard and still lost almost a minute to the fastest run split posted by Shonny who also had the fastest bike.  Ouch.  That gives me something to clearly focus on now that I am healed.  I need to up my game. 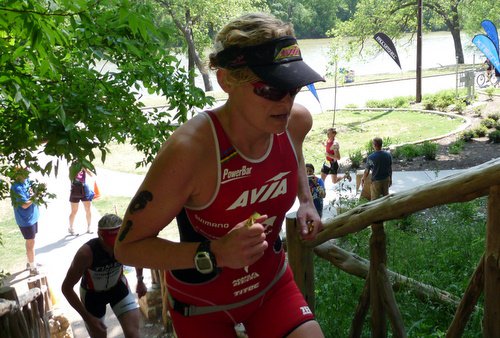 Running up the oh so fun Jacobs Ladder section…. 88 stairs?  Not good for average speed….

My last night in Texas was again at the Thatcher residence where Lance busted out these two beauties to celebrate my win and his top five in his age group.  Good times! 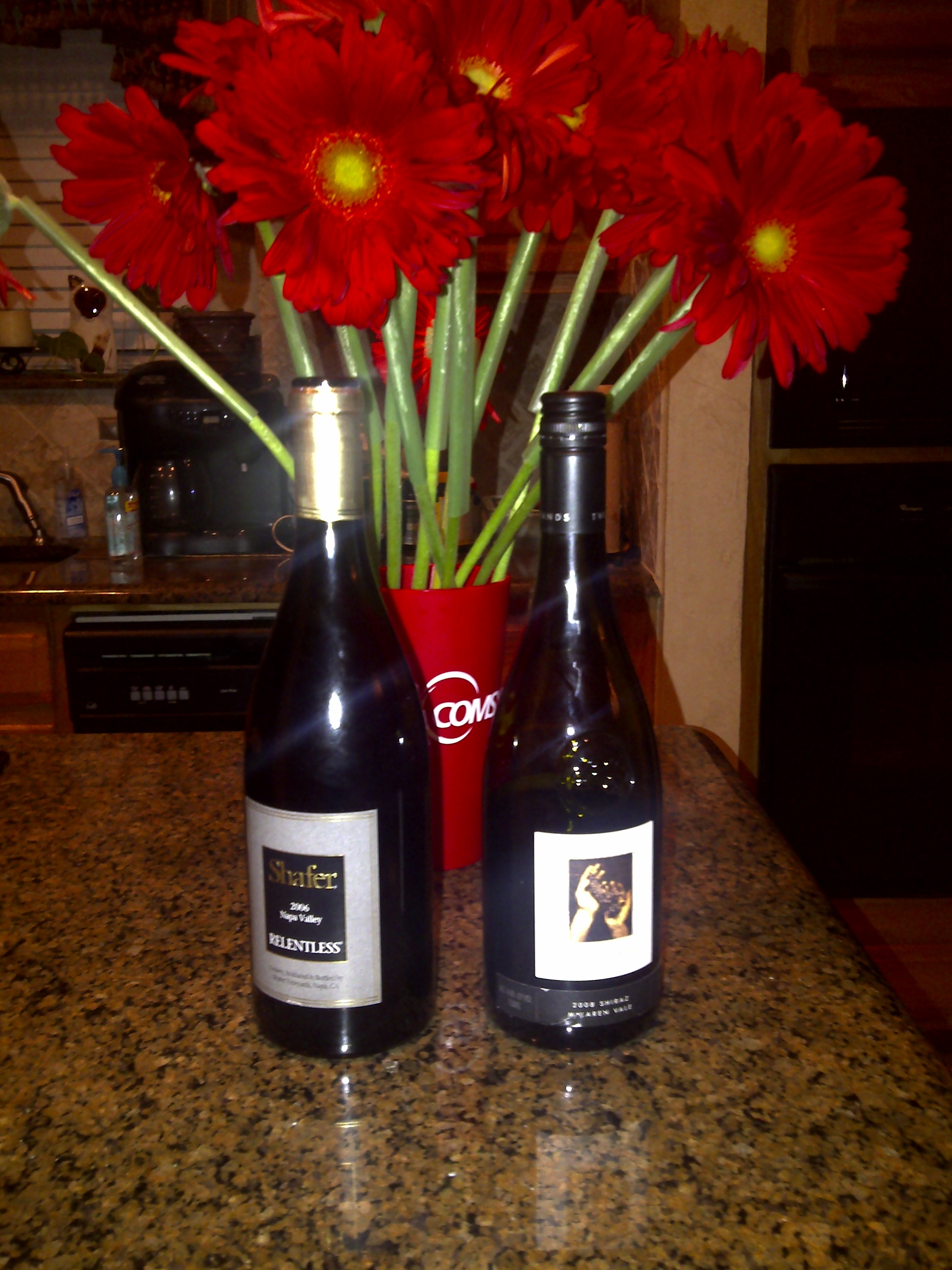 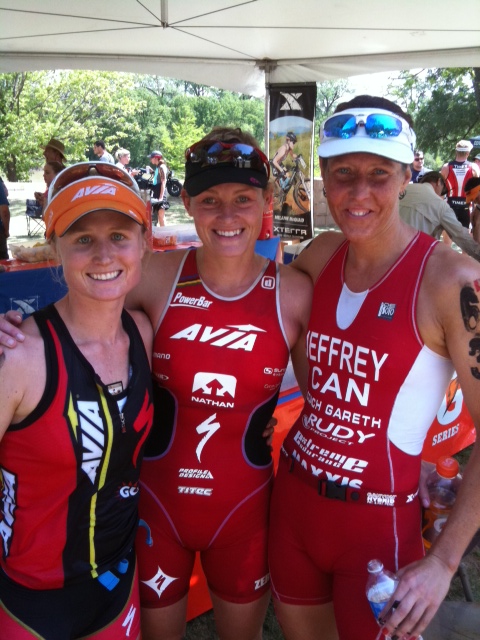 Two of the strongest chicks on the tour:  Emma Garrard and Christine Jeffrey

Thanks again to Specialized and Bicycles Outback for giving me the winning equipment and support that made the race a success.  Thanks to Shawn from AVIA for popping in and cheering us on!  Thanks to Nathan, Shimano, Maxxis, Sundog Eyewear, ZeroD, Powerbar, Profile Design, Titec, USANA, Cycleops, and Genuine Innovations for supporting this umpteenth bid for a successful race season.  Congrats to Conrad, Josiah and Seth for putting on a good show with the top 3 men within 15 seconds and to Nico and Branden for rounding out the men’s pro podium.  Next up is the inaugural ITU Cross Triathlon World Championships in Spain in two weeks.  Maybe I should bring my new fancy Waco Champ belt buckle for good luck? 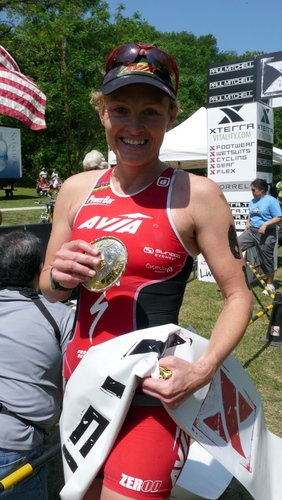