The first “half” of my season is finished with the past double header in New Hampshire 70.3 last weekend and the fifth stop on the XTERRA tour in downtown Richmond, VA this past Sunday.    Although I always race to win I am happy to have finished in second place to a super strong and impressive Shonny Vanlandingham who took her first win of the season.   I am not enjoying the health and form that I had when I started this insane schedule on March 10th and it is showing in my racing when I faded out of contention on the run.  The heat and humidity generally exacerbates any of my weakness and although I put up a good fight for almost two hours of the race I sadly faded quickly and exponentially in the closing miles of the races to take second.   Finishing runner up to a World Champion is great especially when she has superpowers in heat and humidity.  I am proud of that effort as I felt I got every last ounce of my body that day to stay in front of Suzi Snyder in third, Chris Jeffrey fourth and Jess Noyola in fifth.   Teammate Conrad Stoltz earned another win this weekend to have four wins and a second going into the US Champs later this season.  Very impressive.  He was followed by Dan Hugo, Nico Lebrun, Branden Rakita and Craig Evans.

It looks like the demanding schedule is taking its toll on many of us as the gaps in this women’s race were pretty large.  There were moments on that super hot run where I had to keep reminding myself of why I love this sport so much and why getting another job would be a terrible idea even if there was air conditioning.  I think I fought the hardest while my Bex Runner was extra cool… having some coolness in your hand really helps you mentally feel cooler and the science says it is cooling your core temperature at the same time.  I think I needed a full body ice bath to really rock it though.  REad more…… 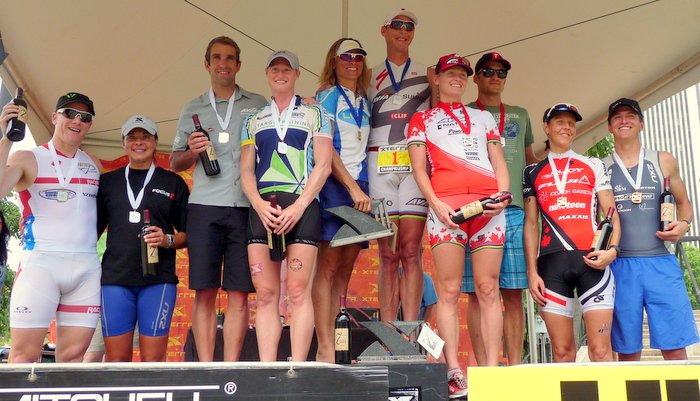 A lot of the usual suspects up there 🙂

Finishing the race was challenge number one and maintaining the race schedule we have faced was challenge number two.  Congratulations to all of the girls who managed to race all five stops on the XTERRA tour and the ITU Worlds in Spain.  That was hectic.  Add to that a trip to Abu Dhabi and two 70.3 half Ironmans and you have an athlete who needs to retire to her garden for a few weeks to recharge her motivation:  ME.   There were some awesome highs this first half:  Winning ITU Worlds, XTERRA Vegas, Texas and Alabama and coming off the bike first to lead 70.3 Oceanside.  Then the lows:  fighting an injury early April, getting sick last week and losing my bike overseas.  All in all it has been a pretty amazing two months and the fact it has ONLY been two months boggles my mind.

Honestly I think the travel is the reason my form has been off but I am also experimenting with mixing the 70.3 and XTERRA schedules this season.  I don’t have that many half Ironmans under my belt so what works and doesn’t work for me is still a bit of a mystery.  I have figured out a lot even in the last few months.  I think that in addition to the overseas travel there have been too many twelve hour trips across the country cutting into either recovery or training.  Nothing has been feeling that good as of late.  I fought the stomach bug from New Hampshire for five days after that race which didn’t help me recover well and honestly, I don’t really know how long it would take to recover fully from a half if I were totally healthy.   The 100F temperatures we experienced last week in Richmond were extra delicious for training and most of the time I just felt like curling up on the couch with a popsicle.

Thanks to Specialized I had a bike waiting for me on arrival which minimized some travel stress.  My bike was in mint condition for race day with some new Maxxis Ikon 29er rubber mounted and ready.  I didn’t train at all during the week before the race.   Instead I enjoyed a ride with the Posichiro crew at Wakefield Park where Scott Scudamore put me to shame on a huge log (he rode it, I didn’t) and enjoyed some preriding  with my MelRad crew and friends (thanks to 14 year old Evan and Taylor for showing up on the rides.. it was motivating to see two such awesome cadet talents in the sport!). 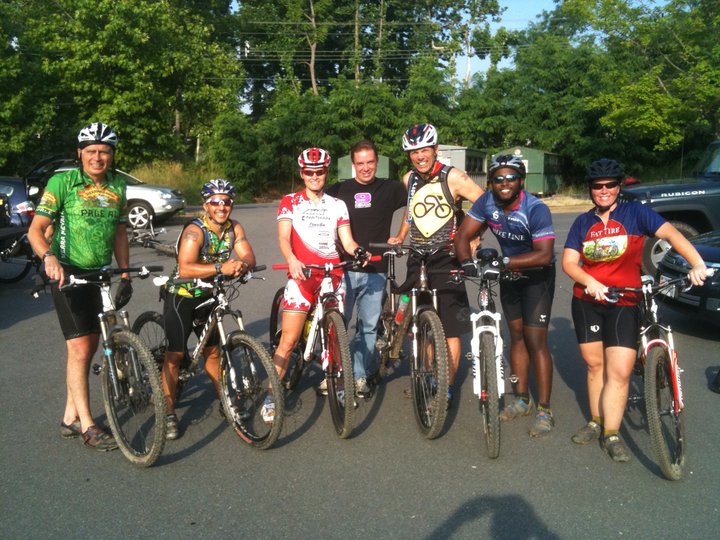 The most awesome part is I saw all (but the guy with no bike) of these people racing in Richmond!  Way to go guys!!

If I wasn’t enjoying racing at full gas I was really enjoying the opportunity to hang out with my team and friends.   I enjoyed a few days with my friend and homestay in Richmond Jay Paul who was helpful in getting the XTERRA race back to Richmond for another season.  Looks like the new sponsor Luck Stone has committed to the race returning for the next two years so we can look forward to returning next year. 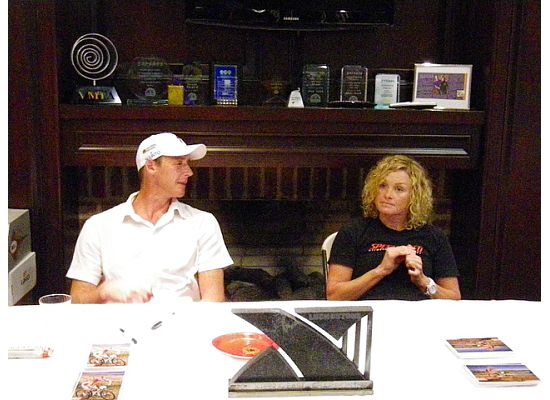 Mel and Conrad chat triathlon at 3Sports in Richmond.. looks like one of the many moments where we share a debate 😉 Conrad: “I think peanut butter is the best.”  Mel: “Well, peanuts are pretty good but I have to say that almonds are much, much yummier…”   Just kidding.. this was another hardtail vs softtail merit discussion.

The course this year was considerably longer than last year but was even faster as we rode complete laps in the opposite direction.  An overnight thunderstorm left the course a bit damp but nothing was overly slippery other than the ramps and bridges.  There was one horrible moment when I ran up the back of a sport racer on the steep ramp section which I thought was going to mutilate me.  The other heartbreaker was when I dropped my bottle at my feed going into the second lap and although the new Powergels are much more liquid and easy to swallow I prefer to do so with a drink!  I am sure not having any liquid at all for an hour only accelerated my demise.  I don’t think I would have been able to match Shonny’s strength on the day regardless but having advanced dehydration going into the run just made it even more of a character building effort.   This is a strong case for always racing with a Nathan Hydration Pak.   It is amazing how easy and effortless strong performances are no matter the conditions and how hard and humbling less than 100% days are.  It is way easier when you are going your fastest, in my humbled opinion.

My MelRad Racing team was well represented in Richmond.  Fred Smith won the overall age group title for the second Champs race in a row and in the process earned 7th place overall.  Given he rode through not only the back end of the Sport race (which we also did) and all the pro women and a bunch of the back end of the Champs race (which we also did) he was FLYING.  His new benchmark will be those pro guys for sure!  Kate Button and Jo Markham both kicked 25-29 butt taking 1-2 in their age group and 3-4 overall age group.  Whitney Houck and Lance Thatcher both continue their improvement in the sport with strong bike rides and good finishes although Lance was pretty bummed to have a flat and hurt his wheel.  Boo!  My homestay Kathy Coutinho destroyed the age group field taking the overall and looked like she could have done the whole thing 2x again when she finished.  She is such an inspiring and positive athlete, chiropractor, mother and wife.  If you live in Fairfax you should visit her Posichiro Clinic, you’ll never be the same after meeting her.  You will be so motivated no one will recognize you.  Spending time with her and her family was a lot of the reason why I could get back up after being flattened at Mooseman and get out there to fight again.

So at this stage I am definitely finished with blowing up on the run which always happens when I am tired and depleted.  It has everything to do with fatigue and nothing to do with fitness.  My run form came around really well after I got over my injury in April and I was feeling confident after Alabama that I was on the right track.  However, the last two races were not great be it illness or fatigue.   So the goal is no airplanes for a month… living in Victoria means I criss cross the continent every time I go to the East coast with each day of travel about 12 hours.  It took less time for me to get to Europe than it took me to get to Texas.  I wouldn’t live anywhere else but I also need to address that stress immediately.  I also need to spend some time training with recovery as I feel like I have just been sitting on the couch with sore legs…without consistent training sessions to earn them.  Racing is only good training up to the point where your races are no good.  Then it isn’t good training any more.