The last time I did a back to back weekend was another season where I tried to “ride two horses with one arse”.  It was 2004 and I was racing mountain bike cross country and XTERRA and wanted to participate at Canada’s mountain bike nationals and at XTERRA Keystone.  I flew from Quebec to Colorado on a Saturday night in order to make that happen.  I flatted at the muddy Nationals in Mt St Anne and came maybe 6th (not sure, can’t find that!) and then I came 2nd to Jamie Whitmore the next day at Keystone.  It was a tough double and it kept me in the running for the overall series for XTERRA.

Fast forward to 2011 and again, I am chasing two rabbits.  Doing an XTERRA and an Ironman 70.3 in the present season is a different animal altogether.  Not only are the two races so darn hard but the field at both races have gotten so tough that even a tiny bit of weakness is exploited with an ass-kicking.  However, I was in a points conundrum.  If I didn’t go to Beaver Creek (9000 feet Colorado) and at least try to get a 4th or higher placing, winning the US Nationals in Ogden would not be enough to win the XTERRA Pro series at the end of the year.  Boo on that after winning three straight races and a World Championships already!  I want the OVERALL!

Unfortunately, I raced last weekend at the 70.3 in Indiana with my head stuck firmly up my arse.  I had an astonishingly bad race on fresh legs with obviously decent form.  If I did not go to Vineman to race I was possibly going to not make the top 25 in the US Pro ranking selecting athletes for the 70.3 World Championships in Vegas on September 12th in the first round.  The would then require further points chasing. My goal was to race well at all three World Championships, not just participate.  Having to chase points would make me race more rather than less and possibly end up fried by the time I got to the Worlds.    Boo on that as well.

So I figured screw it.  Give it a go at the back to back.  I said to myself: “See how you can do and whether you can salvage your goals by turning your stupid head off for a weekend and just race like you have nothing to lose*.”  I am pretty sure too much thinking was getting in the way of me performing.

None of this is a recipe for high performance.  I would rather go to a race at altitude with the acclimatization I know that I need.  I would rather race a half Ironman with enough taper to perform at my best.  I would rather be racing for a win rather than racing hoping to do okay or aiming for a mediocre result thrilled with a decent result.  That is my preference.  However, when push came to shove I was going to go to the trenches to just get the job done and get myself where I wanted to go.  Even if it was ugly.  I was fully expecting to underperform by leaps and bounds at both races.  After Vineman, Shawn from AVIA told me to stop racing so I can start winning.  He is 100% right.  However, I needed one last weekend of insanity to be able to do that.  This is how the weekend went.

Racing at 9000 feet the week after a 70.3 with only 7 days of acclimation and coming 2nd to a World Champion at XTERRA who lives at high altitude is the equivalent of winning to me.  There is a reason both Conrad and I choose to skip this race every year.  The amount of effort and preparation required to even hope to win at altitude can only be applied to one race:  Nationals.  For a series race at altitude we leave it to Josiah and Shonny to kick butt.  Which they did.  Coming second in the same area code as Shonny for Mel= fantastic!  I had a fabulous and thoroughly enjoyable battle on the mountain bike with Kelly Cullen and Sara Tarkington which made the thin air sparkly and alive.  I briefly considered how much easier it would be to concede to the 4th place I was in on the bike for a long, long while but then I reconsidered.  I dangled off the back of their wheels for the second half of the bike.  On the last climb tried to get back  up to Kelly which briefly unhitched Sara so all of a sudden I was in third.  Motivated, I pressed on.  I had the worst transition of my life and still came out in front of Kelly who beat me to T2.  Free time is a good time.  Kelly and I had a battle royale on the run to about 3 miles when I attacked her on a downhill just to see what would happen and I got away.  That hard downhill running felt AWESOME the next day at Vineman, just fyi Kelly, so I definitely paid for that. 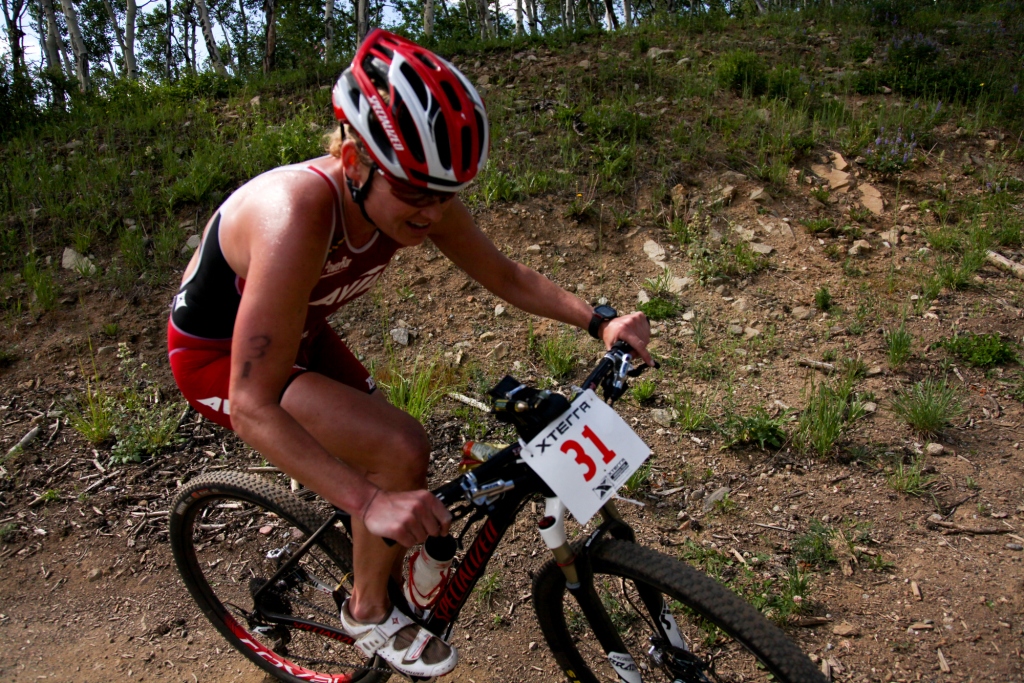 Immediately after finishing I was packing my bike, showering and driving.   I was pretty sad to miss what I was sure would be my only podium of the weekend.

I was on the road within 60 minutes of getting home.  Two hours to the airport, 2.5hours in a plane and a further 1.5 hours to Santa Rosa and I had shoes in T2 and a nice soft, comfy bed at Thomas and Diana’s place.  Read more for the rest of the story…

The next morning, Thomas and I hit the road at 5:40am.  My mistake, I was for some reason thinking the race started at 7am rather than 6:32am.  Scratch the warmup.  I got to transition, found my spot, put on a wetsuit and discovered that if I don’t want to warm up at all I can get a lot more sleep in the morning.

My swim was a disaster but I wasn’t worried.  I was still asleep probably.  The first 15 miles of the bike were also average as I worked some goo out of my legs.  I really wasn’t “hammering” I was more gently pushing the throttle as hard and as persistently as possible.  I can go a crapload faster but not the day after a 4000 foot climb.  The highlight was actually catching Mirinda (yay!  there is the RACE!!) and the lowlight was being hit by a car (boo on the redneck in the white suburban) and the ultimate was making it to the last spot on the prize list in 8th place.  I ran almost 20 minutes faster than last week the day after I pummelled myself in an XTERRA. It is ridiculous how slow I went in Muncie because an XTERRA trail run is not a good warmup it is a beat down.  I got my invitation for the first round of qualification so all my goals from this two days of insanity have been met.  Leading the XTERRA Points series going into the finals in Ogden and I have a spot for 70.3 Worlds.  RELIEF!!

So on to some R&R thanks to my friend Lisa from De Loach Vineyards.  Thank you to Specialized for the uber fast FATE I rode at Beaver Creek and Nor Cal Bike Sports for the awesome Shiv build that was waiting for me in Santa Rosa that I didn’t even need to test and it was running perfect!  Thanks to Thomas, Diana and Kevin for the awesome homestays.  Thanks to AVIA for the support at Vineman.  Thanks to Shimano for a cool-ass perfect working Di2 drivetrain and fast wheels!  Thanks to Powerbar for fueling this adventure.  Thanks to Profile Design for the warm and comfy wetsuit.  To Sundog Eyewear for my cool shades, Maxxis for fast rubber,  USANA for keeping me healthy, CycleOps for making me fast, Genuine Innovations for keeping the rubber rolling and to ESI grips for good product.  Can’t do this stuff without you and here’s to resetting the motor so we can find the top step of the podium for the big finales coming up!

* I used a lot more profanities in this self talk