The fourth stop this season on the XTERRA Pro tour at Oak Mountain State Park in Pelham, Alabama was another huge W for the Specialized/AVIA squad.  I was so happy to turn last week around and join Conrad on the top step of the podium.  After a week of regrouping, relaxing and rebalancing I brought a much fresher set of legs to the race and won it with a strong swim, bike and run combination.  Nothing super flashy (although my swim was the best this season) but no leg of the race was weak.  Shonny Vanlandingham ran down Renata Bucher for second while Christine Jeffrey and Emma Garrard claimed the last two spots on the podium. 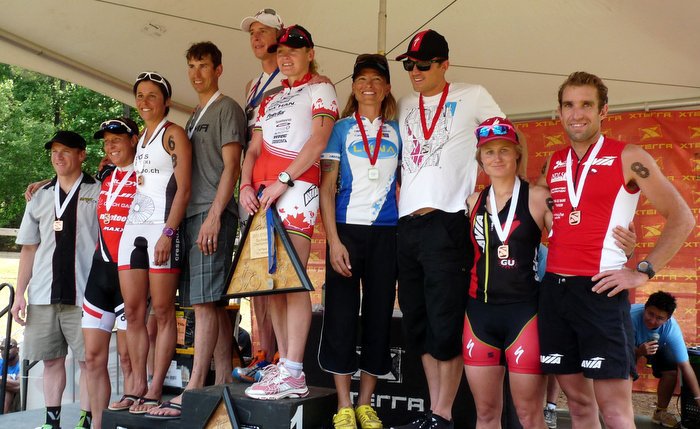 Conrad and I had a great chat after Santa Cruz at a team dinner….

We compared our training regimes along with some chat about life around training.  I think we both have a similar attitude towards life (do what you love) but when it comes to training we couldn’t be more opposite (I have an insatiable urge to crush myself – he likes to kick back and ride motos).  Both of us find the top step in our own way but this week I needed to borrow a page from his training log.  Given he was having more success with the back to back races I decided to put the worries about 70.3 on the back burner and follow his lead this time around.  I spent a lot more time this week relaxing, drinking coffee, socializing and wandering the shops (it was my birthday after all) than doing any training.  I think that was the key.  However, despite my “light” schedule I laughed when I heard what Conrad did.  Still probably 1/3 of the nothing  I did.  Still, we both got it done so no criticism.

I think it is clear that Shonny, although nearly unbeatable in the hot and humid conditions, struggles a little with cold weather.  She didn’t like last week’s conditions or those in Vegas but this week came roaring back just as I had anticipated with a strong second place.  Renata Bucher, winner of last year’s other scorcher in Texas  had another solid race taking third, with Christine and Emma rocking the next two spots on the podium.  The conditions were tough with the temps reaching the 90s but I think I had solid legs and found the perfect even pace from start to a strong finish.  I am stoked. 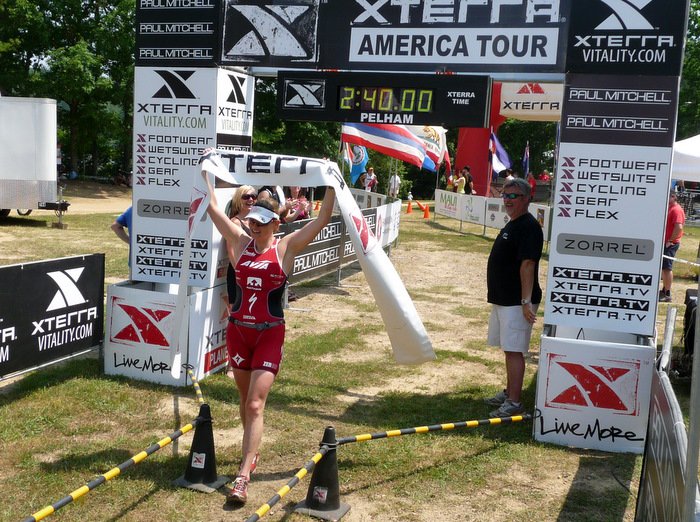 It seems you have to borrow something to win these races.  Lesley borrowed Emma’s goggles last weekend and won.  I didn’t borrow anything and look what happened.  This week I borrowed some rubber bands for my shoes from Suzi Snyder and got the win.  Vegas I borrowed some sunscreen, Texas a wetsuit, Spain a bike and now in Alabama some rubber bands (and a training plan).  I plan to beg and borrow every race this year.  It will be fun if everyone else starts doing the same!  I almost needed to borrow some goggles when I broke two pairs on two attempts to warm up for the swim.  This race I opted to not wear my Profile Mako speedsuit (the one with the fast coating) as I am not allowed to wear them in 70.3 anymore.  I still swam well but it would be interesting to now try swimming with it to see if I can go out even faster?

So here is a list of the equipment I chose for this event:  Specialized Epic 29er, Shimano XTR 2×10, Maxxis Ikon 29er EXO, Sundog Triathlon glasses, Prevail helmet, custom Specialized TERRA mtb tri shoe, ESI Grips, Powerbar Endurance and Gels, Saltstick,  Nathan race belt and Transition bag, AVIA Bolt 2s.  I also was careful to take some USANA antioxidants to help with recovery/immunity and I wore a LIfestrength Ion bracelet (xs in matching red) all to ensure my body was healthy and balanced.  I ran my tires at 21psi in the front and 23psi in the rear and my front fork and shock was at the “soft” Brain setting.  That was a first as I normally set the tolerance much higher.  I also carried the Specialized mountainbike multitool with a chain tool on it and took a Big Air Cannister taped to my stem.

Alabama is a mountain biker’s race course.  I think the 29er with fast rolling tires was the best strategy overall.  I was rolling with the men’s pack for what I consider a long time on the bike after my great swim, which was awesome and motivating.  I would say the Ikon was almost the perfect tire but because the weather warmed up and dried out at the end of the week I might have chosen a tire with more aggressive side knob on the front.  My last preride was Wednesday so I was surprised (and nearly dumped it a few times) to find the corners considerably looser than I had seen earlier in the week.  I also lost my gloves in Santa Cruz and needed to ride without on race day.  I also lost one pair of my glasses in Santa Cruz… the cold weather froze my brain I think. 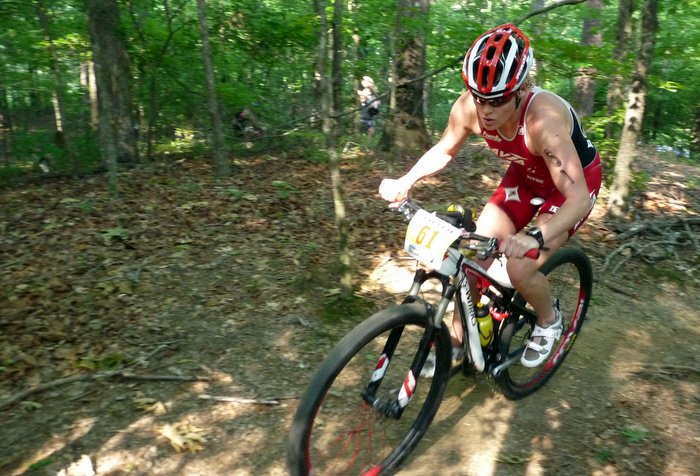 Without gloves, the ESI grips on my mountain bike were surprisingly good and I was happy with how good my wet, sweaty hands were gripping the bars.  Honestly, I felt relatively safe without gloves.  Not that I am going to make that a habit but it wasn’t too bad.  I rode the whole course including the long climb in my “big” ring since I am riding the Shimano XTR 2×10 with a 40 tooth front chain ring.  To be honest, the new XTR gear ratio is revolutionizing our riding.  It is so much better to have smaller chainrings on a mountain bike. It makes you wonder what the heck took so long.

The course in Alabama is fun from start to finish.  The course has a comfortable, non-suit lake swim, a 90% singletrack mountain bike course and a challenging trail run.  It is what an XTERRA event really should be:  a very physical challenge where the fittest athlete will win if they have some technical skills.  And some heat tolerance.  A hydration pack from Nathan was first choice for all the MelRad racing athletes in this race.  You went through lots and lots of fluids.

The new run really helped me take advantage of the AVIA bolt racing flats.  In the past the run course was suitable only for mountain goats with 7 walls of hell to get over on your way to the finish.  Only about 2 miles was running and the rest was all scrambling/suffering.  Now the course has the original 2 miles of singletrack, 3 of the walls of hell and finally a 2.5 mile trail circumnavigating the lake.  The course is still very hilly and tough but when you go over the walls of hell the finish feels flat.  It was funny in the race when I went out onto the run about a mile into it a relay guy was bearing down on me.  He booked it past me right as we hit the walls of hell section.  He pulled away a little slower through there but got away on the downhill.  However, I giggled when I saw him again, passing him in the last mile of the race.  That was the key:  pacing.   No matter how easy you try to take it when the temperature is in the mid 90s when it takes everything you have to run up a vertical hill your heart rate is going to skyrocket.  By minimizing the anaerobic efforts before the last two miles I was able to finish strong. 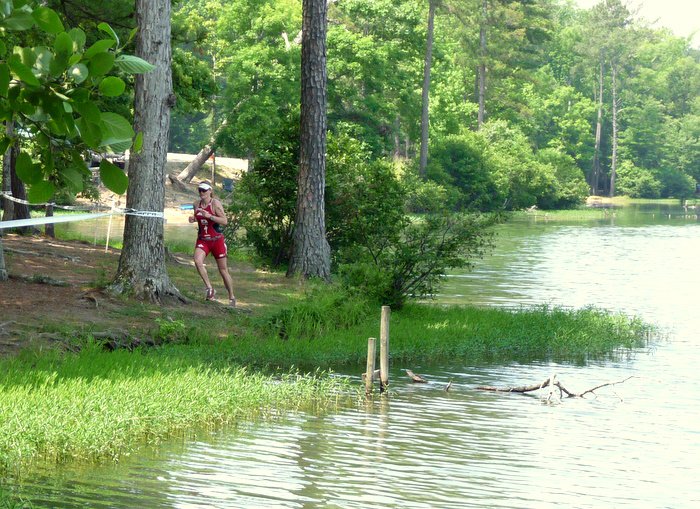 I think it also helped that I was careful to make my drink quite dilute so that I could eat all my Powergels without getting too full of sugar.  I only took water in the feed zones as I decided to take another gel on the run in order to get more electrolytes in and avoid cramps in the steep hills.   When you get dehydrated those gels can wreck your stomach if you drink too much sugar to wash them down .  At the finish I was tired but not destroyed like in years past when I just keel over with heat exhaustion from going out too hard on the run.  It was a great learning experience for me in exercising patience and confidence in a strong finish.

Thanks to my awesome homestay family Mark, Dianne and their two dogs Virginia and Hallie.  Hallie was my little buddy all week… when she woke up in the morning she made a beeline straight upstairs to jump in my bed (until I shut the door since she gets up at 6am).  She is a very cute lab puppy.  Mark and Dianne were so generous with providing Kate and I with a place to stay, feeding me bottles of awesome wine all week and hosting all the pros in a post race barbeque when we were tired and lazy and wanted to hang out family style.  It was great.  Mark also joined me in my post race run around the lake to get a bit more running in (Conrad you didn’t think I was going to adhere to the plan when the race was OVER did you??).  Haha!

I am going to brag a bit about the MelRad racers since they kicked butt this weekend.  Fred Smith was the top overall amateur male and Kate Button won the 25-29 AG category in Pelham.  Meiling Yee also rocked a second place position on the podium in Pelham to make it an all podium performance weekend since Lance Thatcher was second in his age group in Austin, Texas at that regional XTERRA.  Go TEAM!!

Next up is the 70.3 in New Hampshire in two weeks followed by the XTERRA in Richmond.  That will be another challenging back to back race schedule but I will be ready for it.  One more regular season XTERRA before I put the offroad racing on the backburner until the playoffs and focus on the half Ironman distance for two months.  Looking to make it a good one!