This was my first time at the Oceanside 70.3.  I have done the 70.3 distance six times but Oceanside always seemed too early, too cold (in California!) and too close to the XTERRA season.  Now that XTERRA is firmly placed in the backseat I can now start to try new races and where better to start than one of my favorite California towns.  Luckily San Diego was showing off with some spectacular weather pre race so we were treated to an all together perfect race as far as conditions, organization and course were concerned.

The Specialized US team racing here was completely spoiled by the awesome Specialized pit crew. We were babied by Jeff, Myron and Jo who are the most awesome and pro onsite staff in the industry.  It was great for us to have a place to hang out and a crew to keep us dialed and calm while we wound down from team camp (more on that later).  Jen, Ben, Des, Jordan, Rasmus, Jimmy and I were all there to represent the big red S.  I also managed to spend some time with Shawn from AVIA who kitted me out with the new cool stuff.  Same with Karen from Profile Design. I have a totally custom men’s Wahoo wetsuit that I am quite comfy swimming in now.  Shimano also dialed in my new Di2 on the Shiv so I had pretty much the coolest bike possible for race day.  You can see it now at B&L Bikes in Solana Beach if you are interested.  READ MORE FOR THE STORY… see tab… 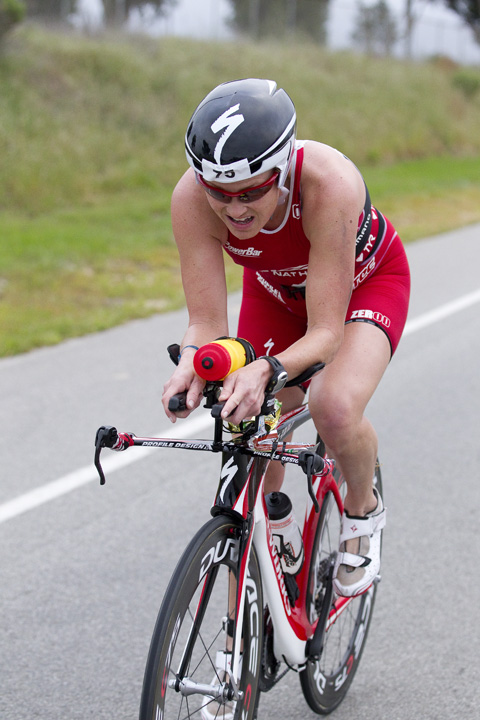 The race was an in water start.  The women didn’t have time for any kind of warmup because we weren’t allowed in before the gun went off but we were all in the same boat.  I think I had a clean start and I knew I was beside the right people as I swam next to Kelly and Dede.  However, because we were heading straight into the buoys the pack kept zigging and zagging and gaps were opening.  I looked up and saw there was a gap and frankly, couldn’t get across.  No longer on fast feet I swam next to someone else (not sure) and I am sure we were too slow but I couldn’t get away from her and I was getting tired since I wasn’t used to the wetsuit yet.  I had the same swim as always in a wetsuit but I think there were some improvements.

Onto the bike I had a lot of people to chase so off I went.  Not until I totally baffed it in transition forgetting my number, messing up the straps on my helmet, missing the rack. You name it.  Nightmare.  Onto the bike I was all good and pedaling hard.  Moving through the field was good as I had good legs and never got stuck with anyone.  I was disappointed that I braked too much on that speed limit downhill, I mis-shifted a few times in the bigger climbs and in general just made a few mistakes because it was my first time on the course, but still managed to take the lead by the end of the bike to head out first onto the run.  Mission #1 accomplished!

My run was definitely off.  Because of that and given the level of the women in this sport I tumbled backwards fairly quickly on the run.  A cast of superstars went by as I saw first Magali, then Heather, then the other Heather, then Mirinda and finally Kelly run by.    I was stoked to be in the mix for part of the race but I certainly can run better than that and will have to.  Still, a good start to the season and only better days to come.  Some qualifying points, some money, some fitness and some confidence. 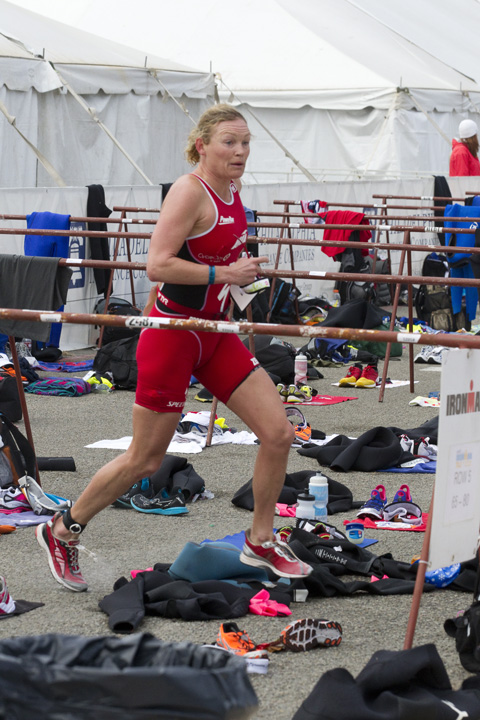 Not sure what the look on my face here means..?

Big congrats to Mirinda and to Heather Jackson for a fantastic show at the front of the race.  Who would have thought that 70.3 racing would be coming down to a sprint and to have so many women so close at the finish?  Congrats to Magali who put together three awesome splits to take third.  Congrats to Heather Wurtele for a strong race and Kelly, despite the fact it stung the most when you kicked me off the podium.. it was impressive to watch you run away from me.  Pretty awesome group of athletes in front of me.

Next big race is the ITU Cross Triathlon Worlds (offroad race) in Spain at the end of the month.  I am planning to race XTERRA Vegas but expect to see a lot more of me at the 70.3 events.  I have the bug now….. this distance has me pretty stoked.

Thanks to Specialized, AVIA, Shimano, Profile, Powerbar, and ZeroD for the support at the race this weekend.  Much appreciated!  And to Maxxis, Saris, Sundog, Nathan and USANA…. we’re off to a great start!

Congratulations to my Specialized teammates racing here in Oceanside for both their performances and for just being awesome:  Rasmus, Rappstar, Ben, Jimmy, Des, and Jen… it was great to hang out and see ya at the races.

After the race I managed to spend some time with a University of Victoria Chemistry department buddy:  Monica!  So great to see her and catch up after a long, long time!  Facebook is only so good….. 🙂  Thanks for the shopping and coffees in Cedros this aft my friend.  Nothing like retail therapy to make it all better!

Okay home at the crack of dawn tomorrow… Victoria, turn up the heat will ya?