Skip to content
This was the first year the ITU (International Triathlon Union) has organized a World Championship event in the offroad discipline.  The ITU is the governing body for mainly the Olympic draft-legal format of triathlon and to date has only organized a European Championship edition of offroad racing that they have called Cross Triathlon rather than XTERRA (which is a brand like Ironman).  Their World Championship was of distances shorter than what we were accustomed to with a 1km swim, 20km bike and 6km run where the bike was 4 laps of 5km and the run was 2 laps of 3km.   It was a super spectator friendly event and evoked memories of short track racing in mountain biking with the fast and furious race format.
The XTERRA events are generally a 1.5km-30km-10km format so the favourites for this event were not immediately evident.  I am so happy that the top three women and men were all very familiar faces from the XTERRA tour with me earning the first ever World title and USA pros Shonny Vanlandingham and my Specialized teammate Emma Garrard taking the next two steps on the podium. It is only fair that we should own the first ITU titles in our off road discipline of the sport.  I was stoked for Christine Jeffrey of Canada who was the first athlete out of the water and then the first athlete after the podium in fourth.  It was a solid day for Canada as for a long while Canada was leading 1-2 in the race.  In the men’s race my Specialized teammate Conrad Stoltz won with Seth Wealing and Olivier Marceau finishing the podium. 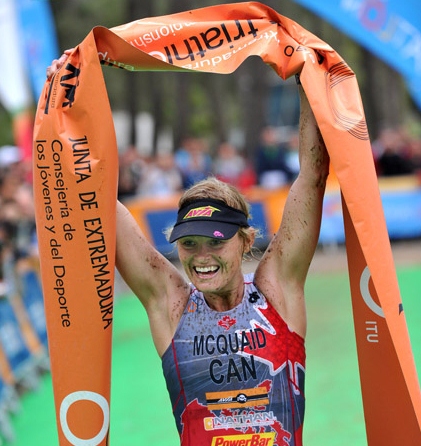 This was the most challenging race week I have ever experienced.  I left Canada the Monday before the race to arrive in Heathrow decidedly unhealthy.  With chills and bad cough from a terrible flu I was in bad shape for our first day off the plane for sure and was really worried about the race.  However, when our bikes did not make the connection at Heathrow I had something else to focus on other than my poor health . The bikes never did make it in time for the race.  In hindsight, it may be that the forced inactivity from lack of equipment was what allowed me to be healthy on race day.  It certainly worked out! 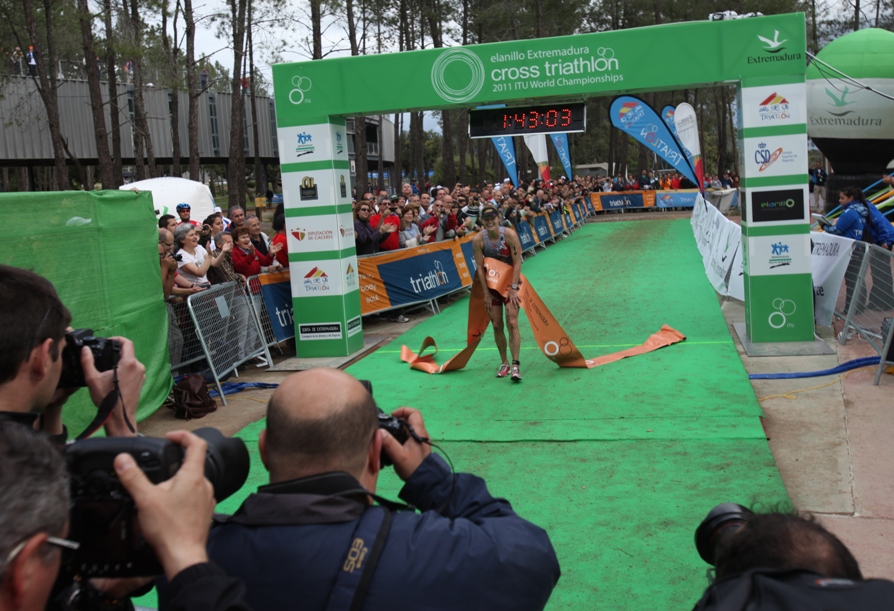 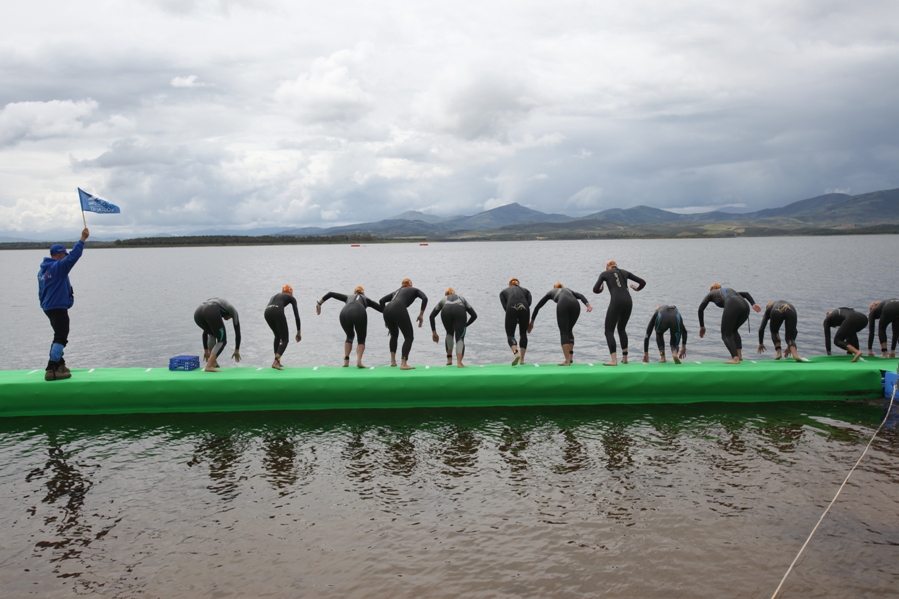 The left side start was way better…that is me halfway in the water already
Out of the water I was on a mission. I figured I could still turn it around even though that swim was less than ideal. When I got on the bike I put my head down.  I went from 14th out of the water to second in one lap of 15 minutes.  I was in first place by the second lap and still with a comfortable lead by the end of the bike.  Although Bev’s bike did not fit me well it was mechanically awesome and worked flawlessly the entire race so all I needed to do was focus on pedaling hard.  I am not sure I have ever been of such a bloody mindset to get every last ounce of whatever I had out of myself.  It was a good feeling.
On the run I felt like crap.  I had sore quads because Bev’s seat was too far forward for me so my turnover wasn’t great.  At the end of the first lap I saw I had a penalty so I slowed down and stopped at the penalty box and, I will admit, I was yelling “what for??”  Turns out that although I rode into transition with my shoes in the pedals, one fell out at some point (I didn’t see it).  I would like to note that the bike racks were designed for 26 inch wheel bikes, not 29, so anyone on a 29er had to spin the bike around and rack the REAR wheel in order to not get a penalty for the bike falling over.  Probably when I was turning the bike the shoe fell out?  Either way, a super unlucky turn of events because a 15 second penalty costs more than 15 seconds by the time you slow to a stop and then get going again.  It made the finish quite a bit closer which is good for excitement but bad for the stress I was having wondering if I could shut it down by the end.  So happy I did and had enough time to savour the last few meters at the finish line.  Good memories. 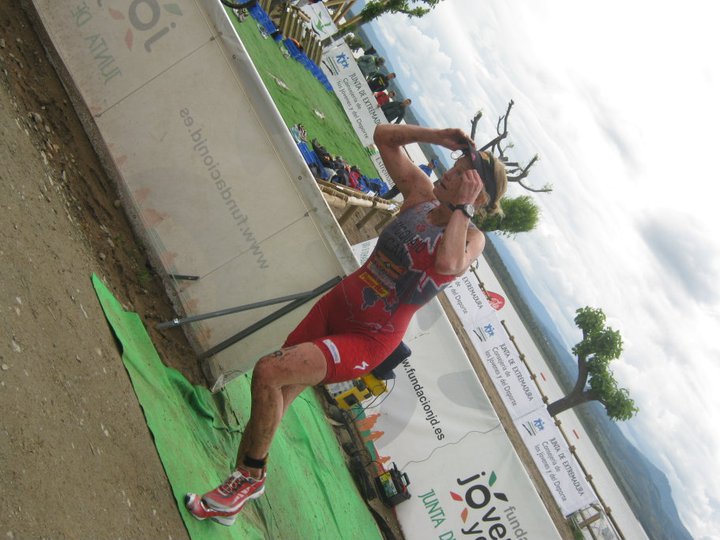 Running out of transition (Photo Antonia Frau)
I get to be the first ever ITU Cross Triathlon World Champion.  I like the sound of that.  I also like the fancy ITU medal, the fresh triathlon world title (it has been too long) and the fact I could make what was looking like a disaster turn into a success.  Yay!  I was very relieved to hold off the super fit and storming Shonny Vanlandingham and I was so happy that Emma had a breakthrough race making the podium.  That ITU Winter Triathlon stuff is making her a force to be reckoned with! 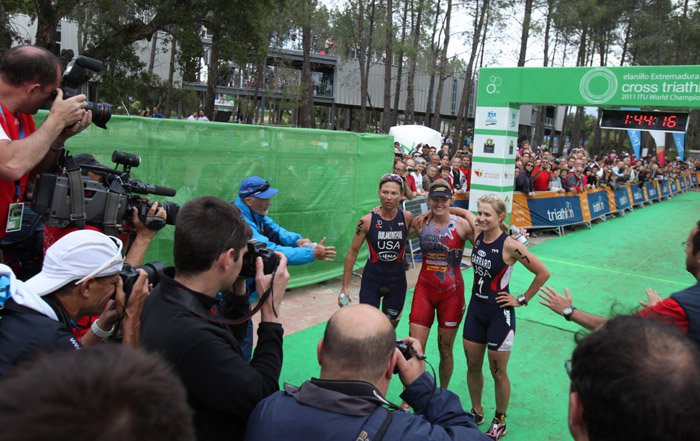 Finishline (Photo Ross Taylor)
Thank you to my supportive and totally understanding sponsors!  Specialized, Maxxis and Shimano, thank you!  AVIA, wow, nice sweep of the entire women’s podium!  Nathan, Sundog Eyewear, Powerbar, Profile Design, Titec, ZeroD, USANA, Genuine Innovations, Saris, Saltstick, ESI Grips – thank you very much for helping me get back to the top step again. I love you all!
We had rented a villa with a big group of awesome chicks:  Christine (4th elite race), MelRad’s Katie Button  (4th in her age group), MelRad’s Jo Markham (overall women’s age group world champion), Emma Garrard (3rd elite) and Sara Tarkington (sadly injured, also no bike, not her best day ) so I had lots of positive attitudes to feed from.   Thank you for a great trip you guys and congrats on all of your races!  So many happy memories in the end of our week at our Casa de Fast Chicks and Ross.
So I am home for a week and then back to the US XTERRA Tour while racing a number of half Ironman distance road events to qualify for 70.3 Worlds.  Here’s hoping these lessons help me to find success at the next World Champs in the 70.3 distance in September!