The XTERRA Cup series finished in Ogden, Utah on Saturday September 25th.  After great races in Las Vegas, Battle Creek, Pelham, Farragut, Richmond and now at Snowbasin, I won the US Championships and the overall series again with a perfect score of 600 points.  This year the series was truly a challenge to find the best overall triathlete given the variety of the courses favoring different strengths so I couldn’t be happier with how it ended.

I am not sure the US Nationals has ever seen a stronger field.  The depth of the field both in the pro and the amateur ranks was truly outstanding and I congratulate anyone that raced last weekend in Snowbasin.  The Ogden course is very challenging with the high altitude, the difficult point to point course and obviously the huge elevation gain with a race starting at 4600 feet and topping out near 8000 feet.  It is a hard race to master.  I also send out my big congratulations to all the age group athletes coming from flat and sea level hometowns who bravely tackled this high altitude event.  It is much easier for me to race there given I have the freedom to travel to altitude well in advance to prepare.  For those coming in at the last minute to bravely do battle, my hat goes off to you!  I congratulate Shonny Vanlandingham, Lesley Paterson, Carina Wasle and Jenny Smith for their strong races to round out the women’s podium.  It was a tough race for everyone.

I felt pretty confident coming into the race.  However, after the pre race dinner I was absolutely inspired.  Fourteen of Mel’s Rad Racing team made it to Ogden.  Of the six that didn’t make it, four were dealing with pretty major illness/injury so it was just bad luck they were not there.  I was so proud of the team that qualified and attended.  No one was chosen for this team based on their ability and ALL stepped up their game to come to Ogden.  I have never been so proud of such a strong, determined, focused and dedicated group.  Then they went and almost made me cry with a thank you gift of two of my favorite things:  a trip to the spa and a gift certificate to Haillemaille Restaurant in Maui.  I  can’t believe that they are thanking me, when I get so much back from this team already. You guys rock and you made my race.  No doubt.  After that evening I was determined to lead by example when that cannon went off.

Although the course profile in Ogden does not exactly play into my strengths, I have a pretty good track record at this race.  I needed to prepare well in advance both physically and mentally for this event, which is why I went to Colorado and Utah five weeks in advance.  Without any altitude preparation earlier in the season, I needed a solid block to be ready.  Also, the five weeks up high had a secondary benefit.  This would be my big quality base phase in preparation for Maui.

In general, Ogden has always represented a “do or die” situation for me so the pressure didn’t really bother me.  The biggest issue I was struggling with was impatience.  I wanted to get it done!!  This year was different from every past season in that we started very early, raced a LOT then had an enormous two and a half month break before the US Nationals.  Most of the rest of the field was busy doing other races but I took a big fat winter-style break.  I thought I would be sharper, stronger and hungrier in Maui if I let my nervous system rest from racing.  I only needed to bring myself back up enough to race well in Utah… and after so much time up high I was a bit nervous that I was under-cooked for this race.   READ MORE

Race day started with a good warm-up riding to the swim start.  I knew I had good legs riding the warm-up so I was confident.  I had plenty of time to get organized, get my brand new Profile women’s specific wetsuit on (which is KILLER) and line up right smack in the middle of the field next to Seth Wealing.  I figured I would just fight for my life and do my best to find feet.  So the gun went off and I sprinted my heart out.  Unfortunately, I blew Shortly before the first buoy, so I had to settle in and recover. By the time we went around it, I found some feet and held on while I tried to find some rhythm.  The feet I was on turned out to be perfect.  I was so comfortable swimming on them that I figured maybe I could work super hard to go past but since I couldn’t really see any other feet to get on, and she was going fast, why bother?  When we emerged from Pineview Reservoir it turns out I swam on Becky Batizy’s feet (MelRad Racer and first amateur female out of the water) with Fred Smith on my feet (MelRad Racer and top 30-35 racer).  I was in a MelRad sandwich!  Cool!  Way to go guys!!

I transitioned quickly onto my Specialized Era and started towards Wheeler Canyon. I got some cheers as I rode by from my swim buddy from Vail Karl Edgerton (who kicked my butt in the swim) and MelRad Racer Tom Monica (who also beat me out) which helped propel me up the hill.  Christine Jeffrey was the only other woman in front of me and she was riding a lot faster than last year so it took me a little longer to catch her.  Will Kelsey was riding well so he caught me sooner this year but when he did I kept the gap to him for the rest of the climb up to the first descent which really helped me focus and go faster.  After the descent I was caught in a lot of traffic which was a bit of a bummer but I shook it off and got through eventually.  I saw Ross at the gate and shortly after got a split that Shonny was 2:45 back with Sara Tarkington riding the crap out of the bike course only 30 seconds behind her.  I figured that meant up to the last steep climb I was holding my swim gap if not increasing it to second.  I knew I was going well.

Now it needs to be noted that Conrad and Melanie chose heavy Maui style tires for Utah in preparation for the last descent.  We carried extra weight and possibly cost ourselves a tiny bit of time climbing in order to crush the descent without fear of mechanical or tire issues.  I rode my Maui tires:  Maxxis Larsen TT USTs.  Nico Lebrun and Shonny V rode lighter tires in order to climb faster, which meant that Nico had to give back one minute to Conrad in the descent and Shonny had to stop to refill air because she unfortunately was flatting on the descent.  This is part of the strategy in XTERRA.  For me, it worked out, for Conrad it almost did.  He relinquished first to Lebrun on the run to take second and first in the overall series. 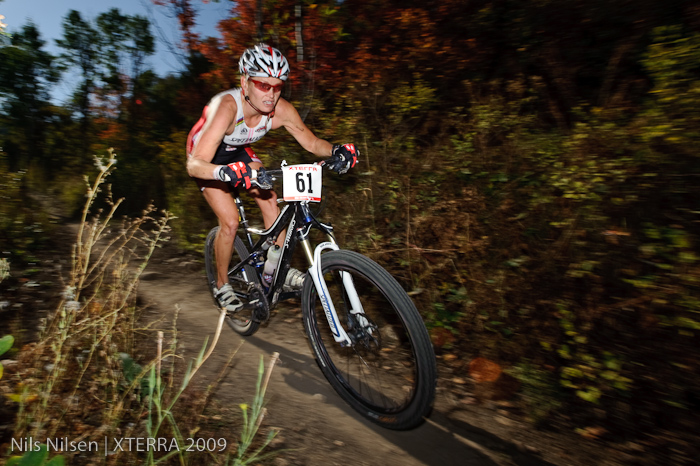 For the last steep road climb I was ready and focused.  I passed back four of the men who had passed me earlier in the trail keeping true to my advice to the amateur competitors that this section is key to a solid bike split.  I went by Ed Oliver who tends to race near me at all of these high altitude races so I had strong company out there.  In fact, last year I was passed by no less than four people here, this year I passed FIVE.  I felt good about that.

After a solid descent to T2, I threw on the AVIA Bolts and flew uphill. I got a split out on the run saying second woman was nearly four minutes back.  I figured either I was a downhill goddess or someone had an issue… betting on the latter. I did a lot of run training going into this race so I was focused on pushing myself as hard as possible right to the finish.  With Ed near me I had some good competition and I was ready to do battle. I went out hard for about three miles and then I blew.

It was pretty catastrophic.   I watched Ed run away from me as my legs just failed.  I don’t know if it was dehydration. Lack of nutrition, (both doubtful) or whether the race was a bit too long given my time away from racing (probable).  I felt a lot like I did in Las Vegas where I was fit but lacking race specific fitness.  I kind of got to the end of my fitness and cracked.  I like to look at it like the race was just a little too long for me… boo on that new run hill!  At the end of the day I knew I had a big gap so I didn’t really panic too much, four minutes is a LOT to lose, but unfortunately that was NOT the run I set out to throw down.  Shonny had the misfortune of losing some air out of her tires which she needed to stop to refill which gave me that extra lead going into the run.  Had that not happened we could have had a reprise of last year’s run battle.  Shonny showed just how dangerous she is at these mountain events and really had a solid race in second.  She will be strong at the Worlds.  Another super strong late season bloomer is Lesley Paterson.  I will not be surprised when she goes well in Maui.  One who I expected to be up in the mix was Renata Bucher but she had an off race for her.  I am sure she will be back to form by Hawaii. 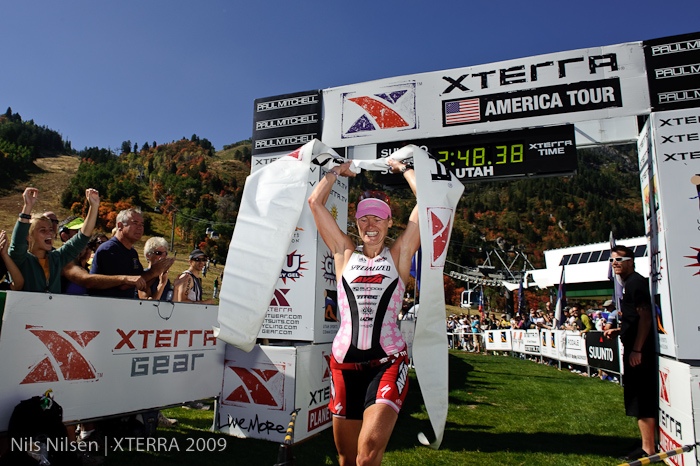 I need to thank my Utah and Colorado hosts Kevin, Brian, Paul and Becky and Andrew for your incredible support that led to this success.  Without you guys this would never have happened.  I also need to send shoutouts to all of my sponsors for your incredible support and amazing products which undoubtedly make things a little one sided when I go to battle.   Congratulations to the men’s podium:  Nico Lebrun, Conrad Stoltz, Josiah Middaugh, Mike Vine and Seth Wealing.

Also a big huge thank you to my team, Mel’s Rad Racing Team, and in particular to Alexia.  You are so amazing.  Thanks for being the most amazing ambassadors for XTERRA and for our sponsors.  You guys are really increasing the stoke going into Maui.  Something good is brewing.

So now I am three weeks and counting.  Undercooked and hungry for more.  Here’s to unleashing the fury in Maui.  Train well.  See ya there. 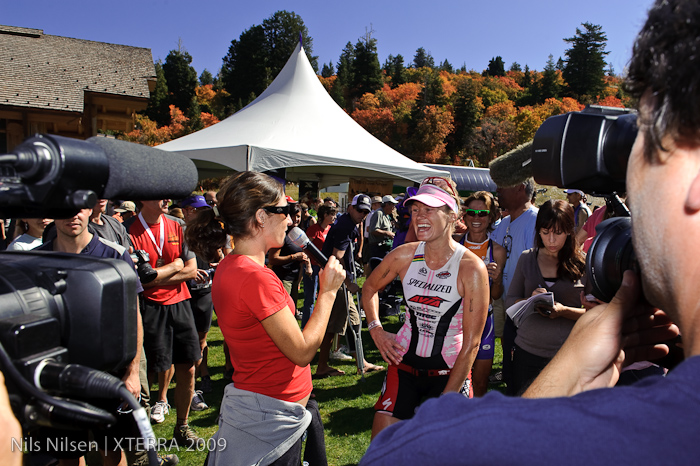