I have to admit that the first emotion I felt when I crossed the line at Snowbasin Resort at 11:40 am in first overall position for the women was RELIEF. After the past few weeks at altitude some seeds of doubt had been sown in my mind after first Jenny Smith and next Shonny Vanlandingham took turns absolutely destroying me at regional XTERRA events. After watching hours of Olympic swimming on television I started to think about how these regional events were like the preliminary heats. Some of the favorites would hold back, saving their best swims for the final. This strategy worked well for some but also backfired for others, with Olympic favorites not making the final eight or worse, those preliminary results were better than the final effort. It is all fine to say that an event is for “training” but only if you kick some ass at the event you are training for! So to get it done on Saturday and earn a perfect 300 score going into Tahoe was awesome, especially given it was my seventh race (not including midweek racing) in seven weeks (Canmore, Squamish, Vineman, Crested Butte, Eldora, Beaver Creek and Ogden) and I was DEFINITELY nervous… and rightly so. I really appreciated the encouragement from Courtney and Jamie that week as well. Jamie is in the hospital right now so having her thinking of me while I was thinking of her was really nice. Please go to www.jamiewhitmore.com and send her some get well soon wishes! As for the exciting day of racing, read on for the story…

I was starting to come apart at the seams this week. I escaped the super high altitude of Vail on Sunday to get down to Farmington, Utah (4,400 feet) as soon as possible. Not before rolling out of bed for a 90 minute massage with Adam and a manicure/pedicure date with Ingrid Middaugh…. I know, I know, it was a rough day off! I had to follow that up with a 7 hour drive so there was some payback for my fabulous morning….

I took Monday easy as well, opting just to go swimming easy. Tuesday I headed up to Snowbasin to run the run course and did a loop of the Maples trail. I was feeling okay running but not so good riding so I cut the ride short and didn’t go up to the top.

Wednesday I rode last year’s bike course with Taylor, Brett and Jake from Biker’s Edge. It was a fun day of riding but I was very tired. Especially as we got to the top of the course I was feeling worked over. We rode some fun single track down Wheeler Canyon which temporarily made me forget how bad I was feeling but after a swim in Pineview Reservoir with Kristine Jeffries where I bonked completely it all came back to me. Yikes. I went home to lie on the couch for the rest of the day before I went to Biker’s Edge to do a talk about triathlon. We had a nice turnout and everyone left with parting gifts from BMC.

Thursday I slept in until 10 am before doing a tiny swim and a tiny bike ride before watching more Olympic games. Friday was about the same. I felt awful and I was freaking out that I was done, that I had raced too much, that I had nothing left for Saturday. I knew that they had changed the bike course and I briefly considered riding up to see it but after an emphatic NO from Ross I knew that wasn’t a good idea. I needed REST. Lots and lots of REST. I would have preferred a Sunday race but a schedule is a schedule….

So race morning dawned and I did all my usual prerace stuff before adding a ride up the last bit of road on the course to see the run and bike finish. You see, I figured it would be close. I didn’t think I felt that awesome riding so I considered that two things might happen… I might be run down or I might be running someone else down. Either way I needed to see EXACTLY where the finish went.

The swim ended up being no wetsuits for pros and wetsuits for amateurs. The Kahuna decided to let the pros start in the water (one foot in front of everyone else) which was token at best as an advantage. You see, over 1500m a wetsuit is probably 2-3 minutes faster… even with my TYR tracer… the Profile Goldcell is FAST. This meant that there was going to be an entire field of amateurs swimming over and around someone like me who swims 20-21 minutes. Sure enough, when the gun went off I was in the washing machine despite the fact I went as far right down the shore as I possibly could. After the first buoy I found some clear water and feet to swim on only to realize that person had blown all their energy in the first 200m and died. Gap. So I ended up swimming easy on the feet I was on and got out almost 3 minutes behind Linda Gallo (FIRST out of the water… you go girl!) and Kristine Jeffries who was not far behind. In fact, my buddy Becky Batizy was first amateur out of the water and I think we were pretty close together so that was great for her too.

It didn’t take long for me to ride to the front of the field as I caught both Kristine and Linda in about 5 miles. In fact I think I went pretty well on the bike for the first climb to Green Pond. After the descent to Maples however the wheels started coming off. The climb subtly gets steeper and steeper the higher you go until you get to the Snowbasin Lodge, turn right and start REALLY climbing straight up a fire road. Right there I was on fumes. I hate granny gear when I am tired. I fought the whole way up the climb to keep it on the rails and was so relieved to hit the Last Chance trail which meant I was going to ride a big ring singletrack towards the finish. 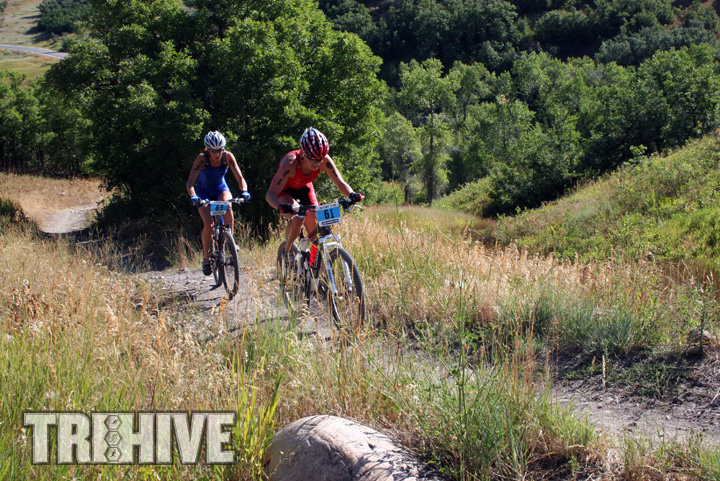 Immediately upon turning onto that trail a bee flew in my helmet. Given I had been stung on Wednesday I did not want a repeat and I immediately stopped to let him out. That meant I lost the wheel in front of me which was unfortunate as I had not ridden that section before. I started blowing every single corner the whole way down. I totally baffed the whole trail, it was terrible. I was not surprised on arrival to T2 that Whit was announcing how close the women’s race was. Shonny was on her way to T2 as I was on my way out. I put my head down, found my shoes (under someone else’s bike) and got going. When I turned onto the Green Pond trail I could see Shonny starting up the steep climb so I knew I had my work cut out for me.

As soon as I was on the rolling section of the run I had a good rhythm going and I knew I would not be caught. Despite my sore legs on the bike my legs were working well for the run. I think a camera man on the moto crashed trying to ride beside me running some of the steep hills. It is tough to go that slow, ha! Actually my run was not so bad… I ran it in 35 minutes which is a lot better than last year so I am happy with that.

So in the end I won with just less than 2 minutes cushion but I had managed to widen the gap on the run which I was happy with for an altitude event. It was exciting to have Shonny coming up behind me and made for a great race. She has really improved this year both in the swim and the run so it is obvious the competition is just getting better and better. Jenny Smith continued her consistency this year taking third, Danelle Kabush rocked the fastest run split in 33:40 and Jenny Tobin rounded out the top 5. Congrats to Conrad for also winning and earning a perfect 300 to Tahoe. Mike Vine was second, Brian Smith was third, Seth Wealing fourth and Josiah Middaugh was fifth. 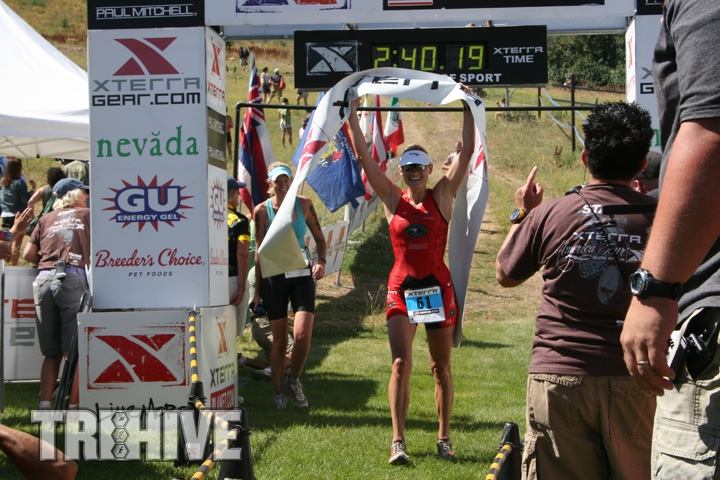 So now I get some REST! I am definitely tired and am looking forward to some down time with friends in Victoria. I didn’t realize I was about to do 7 straight weeks when I made my plan but I guess all is well that ends well! Next up will be the Canadian Offroad Triathlon Nationals at Buntzen Lake in BC.
Thanks to all of my SPONSORS for supporting this 2008 campaign. It looks like a much better season than last! Thanks so much to Biker’s Edge in Kaysville for the pre race support – couldn’t have done it without you guys! Thanks to Bonnie and Adam for the wonderful homestay! Thanks to all the incredible people in Ogden who cheered at the race and who wished me a congratulations at the awards night – I appreciate it all so, so much!

Soon it will be back to business as have a date with Lake Tahoe and I need to be prepared for it!